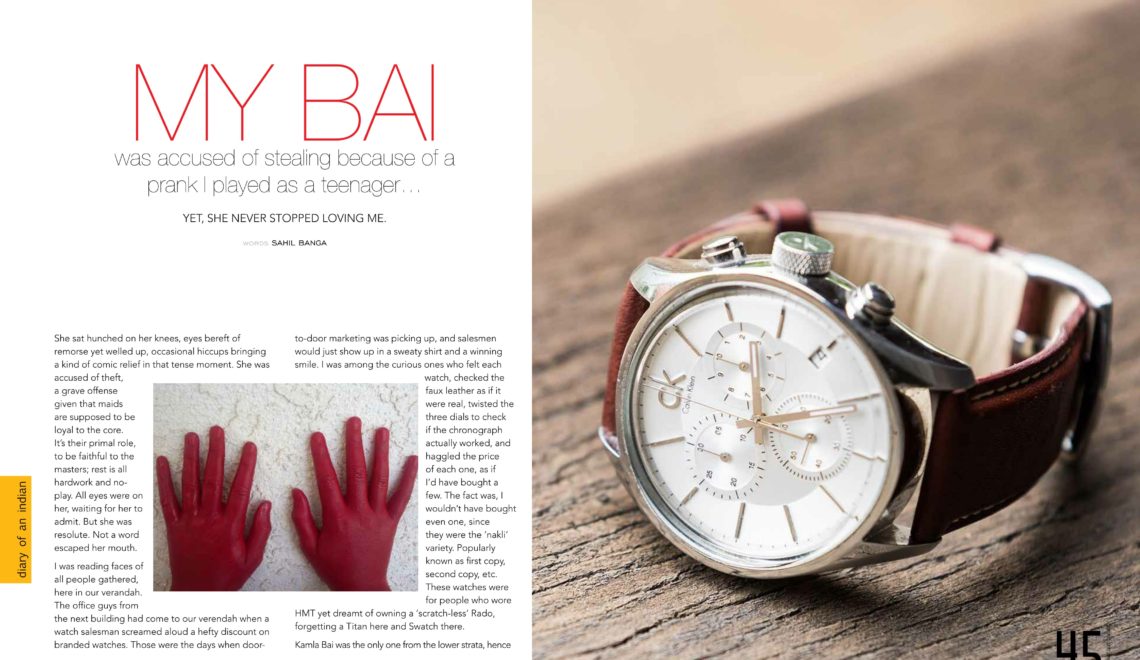 This article was specifically written for The Indian Trumpet, a digital magazine for Indians on all things nostalgia. It feel great to have my article featured in their magazine. Thank you Trumpeters! You can read this article on issuu as well.

P.S. – The images used here are screenshots of article published in The Indian trumpet. 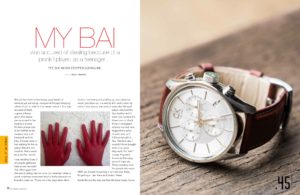 She sat hunched on her knees, eyes bereft of remorse yet welled up, occasional hiccups bringing a kind of comic relief in that tense moment. She was accused of theft, a grave offense given that maids are supposed to be loyal to the core. It’s their primal role, to be faithful to the masters, rest is all hard-work and no-play. All eyes were on her, waiting for her to admit. But she was resolute. Not even a word escaped her mouth.

I was reading faces of all people gathered here in our verandah. The office guys from the next building had come to our verendah when a watch salesman screamed aloud a hefty discount on branded watches. Those were the days when door to door marketing was picking up, and salesmen would just show up in a sweaty shirt and a winning smile. I was among the curious ones who felt each watch, checked the faux leather as if it were real, twisted the three dials to check if the chronograph actually worked, and haggled the price of each one, as if I’d have bought a few. The fact was, I wouldn’t have bought even one, since they were the ‘nakli’ variety. Popularly known as first copy, second copy, etc. These watches were for people who wore HMT yet dreamt of owning a ‘scratch-less’ Rado, forgetting a Titan here and Swatch there.

Kamla Bai was the only one from the lower strata, hence it was believed that it could only be her stealing a watch. The salesman was furious because he couldn’t handle a crowd of 10 people together checking out watches and one among them succeeding to miss his eyes. He couldn’t conjure enough guts to check each person’s pockets, the easiest way to get attention was to blame Kamla Bai.

There was a 3 seater sofa I sat on alone while all others were standing, a scene that was sort of funny because a teenager was hearing out men in their 20s & 30s like a ‘Mukhiyah’. Hearing the noises, my mom came out to inspect what was going on in our house. Looking at her, Kamla Bai started crying aloud, saying she didn’t steal anything and these guys are accusing her. Because mom trusted her, she believed her immediately. Then she played the Godmother by giving accounts of how much cash lies in our household, yet never a penny had gone missing. How Kamla Bai is a woman of utmost integrity, and how much struggle she has gone through in life. Then her stories started getting emotional, to the extent it lost context.

The salesman must have got bored of the stories, so he cut short my mom by saying, “Okay, what is lost is lost. Tell me who all wants to buy the watch now, everybody was interested here.” To his dismay, none of the men came forward. The look on the salesman was one of wonderment. How come 10 guys checking out watches thoroughly aren’t interested anymore. The salesman again said, “I’ll give you good discounts, at least buy something”. The men started giving lame excuses: “I already own a few”, “I didn’t like the leather”, “I didn’t like the straps”, “I wish the chronograph worked”, “I can get better variety in Nehru Place or Karol Bagh” etc.

I expected the salesman to be sad… perhaps ‘very’ sad. No sale and a stolen watch was not what he would have expected. But what he did next was surprising to even Kamla Bai. With real tears, the salesman started crying like a baby. The men tried consoling him that all is not over, that the next lane had many more offices and he should try there. But the salesman wouldn’t stop crying.

Then something happened that even I hadn’t expected. My mom started getting aggressive and asked everyone who stole the watch. In a fit of rage, she started ransacking the sofa as if the watch was somewhere there. Lo & behold, as she flung the cushion, a watch fell to the floor, in all its packaged glory. And there was only one person who sat on the sofa. Yours truly!

Nobody uttered a word. The salesman picked the watch and quietly left. The men from the office had a smirk on their face. More than the astonishment, it was the relief, because few minutes back, everyone was under the scanner. And now it seems that a boy from a seemingly good house had committed such a dastardly act. It was the scoop the whole neighbourhood needed for a good laugh. Kamla Bai tried to salvage the situation by covering up on my behalf, saying “The watch must have slipped out of baba’s hands and made its way through the recesses in the cushions to reach inside the sofa”. Who would have believed her, even she couldn’t believe what she said. 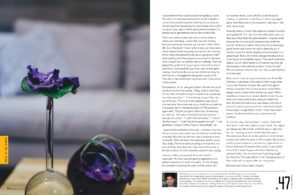 Mom went inside, yelling at me frustrated. Kanta Bai followed. I was frozen. Disturbed at the thought that I would be the butt of jokes. 90s wasn’t the age of trollers. It was the time of face to face insult! When people would come home and rip you apart. When neighbours knew every minute details of each house, even how many whistles the pressure cooker has had. My shameful behaviour was already echoing in my mind, and my worry was how much mirch masala it would go through before it went ‘viral’. How each person would recite that story, dramatizing the situation.

And to this day, nobody knows my story. That I hid that watch under the cushion to get a kick. Teenagers are always up with a trick, and here was an epic one by me. I was happy that I would take the case of this salesman, then return the watch when he’d start crying, and recite the story to friends later. But as soon as things got serious and accusatory, I got nervous. I feared that now if I returned the watch, they’d think I’m a thief. I wasn’t happy with Kamla Bai being accused either, but at least I wasn’t getting caught. So I let it be. That was selfish of me. And generous of Kamla Bai still loving me after so many years. Because Bais have a heart of gold.