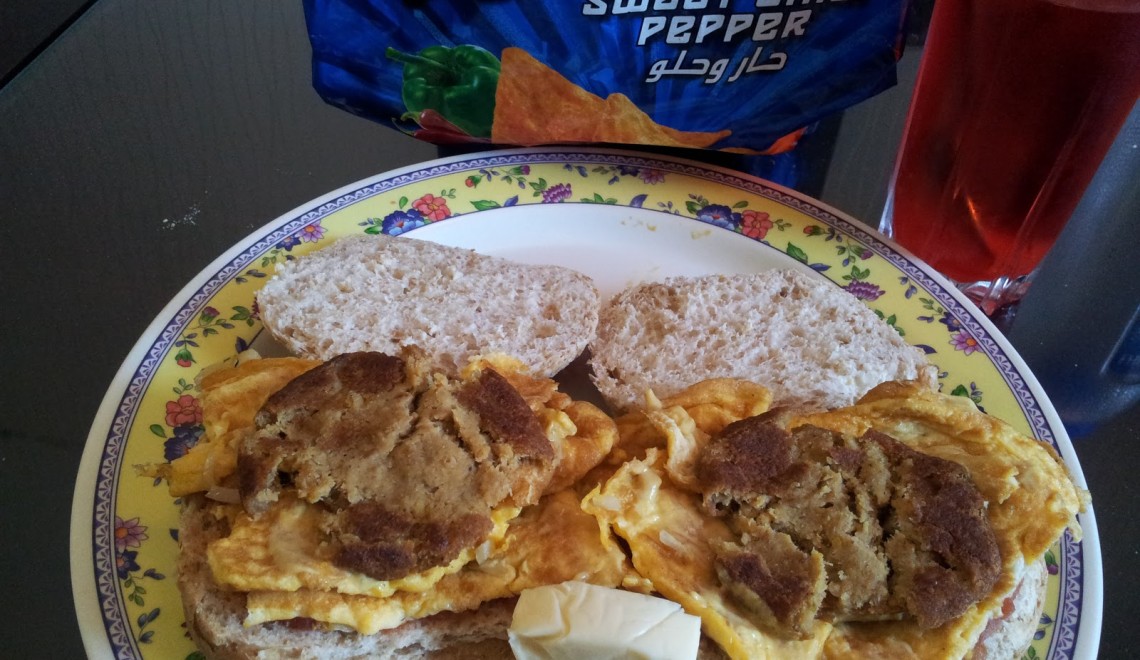 Going to JNU’s Ganga Dhaba in Delhi for so long, my palette had been accustomed to Omelette Bun, their specialty along with a lemonade. Last weekend, as I cooked omelette, I thought, why not have that Omelette Bun and revive the good ol’ days here in Dubai? As I started whisking the eggs, an idea struck, why not make it my way? No, there is no set recipe, and ‘my way’ is usually the impromptu ingredients and ideas I get in kitchen.

Staring at the open refrigerator blankly for some seconds, I zeroed upon the Salsa dip and Dijon Mustard. Salsa dip to bring in the tanginess, make it curry-type so that it doesn’t give me hiccups, and a hint of Dijon mustard to offset the blandness of omelette.
Then I opened the freezer and saw the leftover frozen Mutton Shammi Kebabs from the Green Chick Shop (Which I had got my friend from Delhi bring it) and I thought to myself, “Today is THE day!” For the record, Mutton Shammi Kebab from Green Chick Shop (You will find them everywhere in the Delhi) is the best Shammi Kebab I have ever had. It’s just perfect. Not too spicy, not too bland. Just perfect. Though many people shy away from frozen food, I suggest this kabab to everyone, just taste it to believe it. And it’s as handy as it could get. Have friends over? Fry them. Nothing in kitchen? Fry them! Have nothing on mind? Fry them! Feeling lazy to cook? Fry them! Have a party? Fry them! Just fry them for 5 odd minutes, and you’d have crispy Shammi Kebab which otherwise would have taken a day to marinate and an hour of mixing in the spices, frying, hands smelling of meat, etc. Though that’s an experience worth experiencing too!

Rest of the story is pretty evident. Douse the bun with generous amount of Salsa dip, place omelette over it, rub a hint of mustard on the omelet, then place the Kebab on it.

After you’re done, keep a cheese cube along with it, it enhances the flavor in between bites. I usually neutralize the flavors by having a sip of some drink in between, or adding something like crispies or wafers or cheese, so that the next bite will again bring the original taste, which our tastebuds must have otherwise forgotten by accustoming. Case in point – Brittania 50 50 biscuit maska chaska flavor. After the first two biscuits, you wouldn’t find the same taste afterwards while munching the same. So vary the taste by having maybe cheese with it, and then go back to the biscuits.

Anyway, the Omelette Kabab burger tasted divine. The flavors of Shammi Kebab overpowered everything in the first few bites, with the salsa dip making its presence felt somewhere at the end of the bite. Mustard’s flavor was realized later, but it did delight the senses.
I had it with Sharbat Roohabza, and it couldn’t get ‘desi-er’ than this J
homemadekebab bunomletteRecipe
Leave a comment