The Legend of Moti Mahal now in Dubai

There are some restaurants that have become institutions. Moti Mahal is one of the best restaurants that India has to offer as it has been at the forefront of innovation at its heydays. After all, they are credited with birthing the most popular dishes of India – Butter Chicken and Dal Makhani. They are the one who put India on the food map of the world.

A quick history: Moti Mahal was owned by a certain Mokha Singh in Pehsawar who dug up a Tandoor bang in the middle of his dhaba, a first in that category. He introduced Tandoori Chicken to Peshawar which was a great hit. His trusted employee, Kundan Lal Gujral, learnt and perfected that culinary art of Tandoori. After India’s partition in 1947 and the exodus that followed, Kundan Lal Gujral came to Delhi and started life afresh. He started the Moti Mahal restaurant with a partner along with the same team that ran the Peshawar dhaba. The Tandoori Chicken was an instant hit. But there was a slight problem of preserving the Tandoori Chicken that went dry. Hence came the innovation, Butter Chicken. Kundan Lal Gujral went ahead and also introduced Dal Makhani, which essentially had the same sauce added to the Urad Dal for vegetarians. Today, these two dishes epitomize the culinary art of India.

Moti Mahal has had numerous dignitaries visiting the restaurant, be it the prime ministers, presidents, chief ministers, film stars, visiting foreign dignitaries, apart from the Aam Aadmi. It was the must-visit of anyone from Delhi, or coming to Delhi. Though I may have not seen the heydeys of Moti Mahal when it flourished in 50s to 70s, but even 80s & 90s had not been too bad. They also played live Qawwali on a certain day of the week. And they also did the most logical thing to do, expand the business through franchise model. Hence most of India is covered by Moti Mahal Delux chain now. And it couldn’t get better when they opened up in Dubai at Business Bay (Executive Towers, Bay Avenue).

Though I haven’t seen many Indian restaurants having the same taste here in Dubai, Moti Mahal stuck to the same taste somehow. Chicken Rara is an absolute delight, with minced lamb as the curry. Double whammy! Butter Chicken is as good as it can get. Since Paneer Makhani is cooked in the same sauce, it is as good as Butter Chicken for the vegetarians. The Dal Makhani is creamy and yummy. Subz Masala was okay, not too great. Rest, I haven’t dipped my fingers in any other curry as I stick to Chicken Rara or Butter Chicken as always. Maybe I should try more items from their exhaustive menu. Maybe I should invite a large group there so that we can sample more items.

Here’s the Zomato link to check the details. 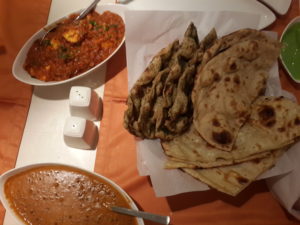