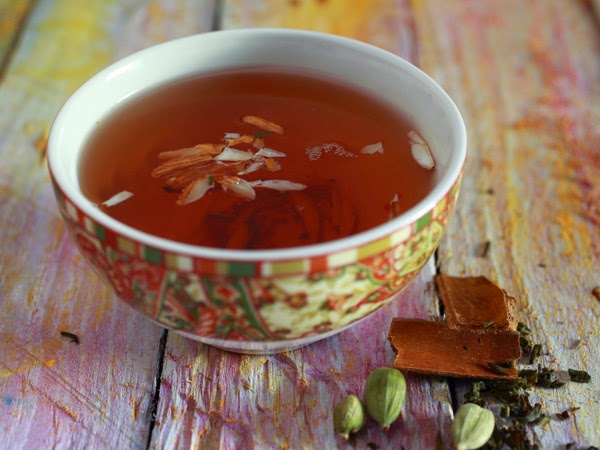 “Have any one of you tried Kashmiri Kahwa Tea?” I excitedly asked my nonchalant colleagues after my trip back from India.
“Ooh, that sugary syrup from Kashmir you are referring to?” pat came the reply from a colleague.
Sometimes, how people perceive things appalls me, especially when it’s related to food. Though I did try to explain that colleague how Kashmiri Kahwa Tea is a spiced tea, and it only depends on the number of sugar cubes you might have dropped in, yet in practicality, he would only remember that sweet taste.
To start with, yes, Kashmiri Kahwa Tea is a tad sweet since cinnamon, cardamom & saffron play a pivotal role in ‘sweetening’ it up. But the aftertaste of the sip is always spicier. It has got woody flavors as well because of almonds/walnuts that bring in richness. And finally the Kashmiri green tea leaves do a cameo to save the tea from being ‘sugary’.
Anyway, this post is not a rant against how people interpret this drink, but how delicious it is for the tastebuds and how healthy it is for the body, mind & soul. Green tea is already famed for its nutritional properties, and this Kashmiri green tea is even more so. It’s for those few like me who don’t drink tea (In fact non tea-drinkers in north India are straightaway given the status of an outcast!). It’s for those who want a quick relief from headache. It’s for those health conscious who wouldn’t mind this drink after meals to settle the scores with carbs (the drink washes away the fats). It’s for those adventurers who admire something new for their palate. It’s for those brave souls living in colder climes who want to get rid of woolens and blankets and enjoy the weather. It’s for that distressed lot which wants to get rid of their addiction from milky teas & coffees (They usually get a headache if they don’t get their daily dose of favorite beverage).  It’s for the overworked executives who want solace in something healthy than drown their sorrows in beer.

Kahwa is a herbal infusion that even Ayurveda prescribes. Though its origins are disputed whether it came from China or lush valleys of Kashmir, the drink is also popular in Afghanistan, Pakistan, Middle East and has travelled far and wide to other parts of the world.
Whenever I have friends come over to my place, I literally try to force them to give Kahwa a try. Because most people I know haven’t tried it yet.
The real taste though would come from Samovar, the brass kettle. Brass utensils tend to lend their own flavors, the older generation still loves to drink water from brass containers. Brass kettle on hot coal in itself is a romantic notion of making the authentic Kashmiri Kahwa Tea. But then, it may not be feasible in our times and might not fit in the fast lifestyles we lead. Hence normal kettles come as savior.
Though when you google, you’d find variations in many recipes & preparations for the Kahwa, here’s my recipe, which I have tried to conclude after several attempts and ingredients.
Recipe for 2 heavenly cups:
3 glasses/600ml of water (Usually take more water since simmering causes water to evaporate)
1 stick cinnamon (A small & thin scrape though, else your tongue will feel dried up)
2 pods cardamom
2 cloves
4-5 strands saffron
A part of aniseed (not the whole aniseed)
2-3 almonds
4 teaspoons sugar
2 teaspoon Kahwa Tea Leaves / Any Green Tea to substitute if you can’t find in your market
It’s not just the ingredients but the preparation too that matters to perfect the tea. Here’s how:
1)     Pour water in the vessel and bring to a boil.
2)     Add whole spices (cardamom, cloves, cinnamon, aniseed) and saffron
3)     Let it simmer on low heat (or lowest, if you can deftly control the knob) for 5 minutes
4)     Meanwhile, chop the almonds and drop them in the cups (You may also add 2-3 strands of saffron in the cup).
5)     After 5 minutes, add the Kahwa tea leaves, turn off the heat and close the lid for 2 minutes so that the green tea settles down. Now strain and pour on the cups that had the almonds. The almonds and saffron will float on the surface, giving the top note a woody twist and making this tea look appetizing.
For a variation, you may add very little ginger to pack in a small punch and cure the throat. You may even omit Kahwa green tea leaves and just enjoy the taste of masala saffron tea.
One Kashmiri uncle told me that Kashmiris don’t strain the tea. They let the residues – leaves, saffron and whole spices seep in at the bottom of the cup to infuse and enhance the taste. Another rationale he gave was that cardamom & saffron are among the priciest spices, why drain them when you can enjoy them? Anyway, I do strain the tea to weed out any particle that might come on my tongue while I savor my piping hot cup of Kashmiri Kahwa Tea. The only thing that complements a Kahwa is the sighting of snowflakes outside your window!
*Please note, the image used is not mine, has been taken from the internet.
homemadeKahwaKashmiriRecipeTeaWinters
Leave a comment