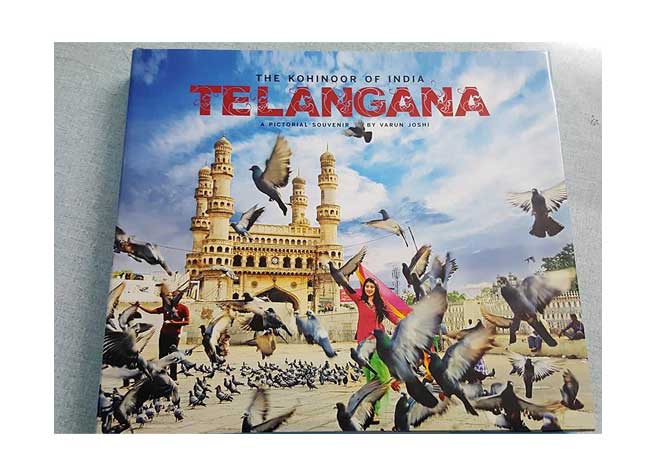 This coffee-table book is the first book on the newly formed state Telangana (India). It was unveiled by Telangana’s Chief Minister K Chandrasekhar Rao in 2017, and the first copy was presented to Late President of India Pranab Mukherjee. The book was later also gifted to Prime Minister of India Shri Narendra Modi by Pranab Mukherjee. The exhaustive content for the book has been written by me, which stretched over 14,000 words, exploring all the historical, cultural & religious places in Telangana.

The Kohinoor of India – Telangana

With a pleasant surprise lurking at every few kilometres, Telangana is abundant with extraordinary legacies. It is a treasure trove of religious, cultural, historical & geographical gems; a cache brimming with enriching experiences. There is no subtlety in its vivid colours, no dull moments in its cultural calendar, no alteration to its centuries old charm, and certainly no change in its spiritual inheritance. Telangana has retained its unique identity as if caught in a time warp, even though perpetually progressing through the winds of change. Though it may boast of a glorious and rich past, it is galloping towards the future armed with technology and channelled by intense curiosity.

Telangana has an exotic amalgam of contradictions in its backyard: noisy marketplaces and soulful rivers, historic monuments and modern cafes, technologically advanced buildings and serene sanctuaries, religious sites and film locales, fabled villages and innovation centres, arts & crafts and IT, and much more. Unrivalled in grandeur, sublime in spirit, Telangana is fringed by surprising delights.

The Telangana word is widely believed to be derived from Trilinga Desa, the ancient name for the region. The three ancient Shiva temples at Srisailam, Kaleswaram and Draksharama are known to be the reason for this name. Another reason justifying the name Telangana is that Telugu Angana (where Telugu was spoken) was the name chosen by the Nizams during their reign to segregate it from the Marathi speaking areas of their kingdom.

Tracing the antiquity of Telangana is interesting since it has been mentioned in the Mahabharata. Known as the Telinga Kingdom, it was inhabited by the tribe known as Telavana who are believed to have fought on the Pandavas’ side against the Kauravas in the greatest war of that era. At Pandavula Guhalu in Warangal district, the fable becomes a fact for the villagers who sternly believe that the Pandavas spent their life in exile at this site.

Telangana also finds itself playing a pivotal role in another Indian epic, Ramayana. In Treta Yuga, Lord Rama along with Sita and Lakshmana is believed to have spent few years of his exiled life at Parnashala, on the picturesque banks of river Godavri. Telangana is home to many legends and fables as the grand setting on which their foundations were created.

In ancient times, the Telangana region was one of the 16 early janapadas, with Kotilingala in Karimnagar district as the first capital of the Satavahanas before Dharanikota. Excavations at Kotilingala have uncovered the coinage of Simukha, a Satavahana emperor. The region between Krishna and Godavari rivers was ruled by the Satavahanas for about 400 years from 230 BC to 220 CE. After that, many dynasties like Vakataka, Vishnu Kundina, Chalukya and Rashtrakuta thrived there, but the region experienced its golden age during the Kakatiya Empire followed by the Asaf Jahis and the Nizams.

Bordered by Maharashtra to the north and north-west, Karnataka to the west, Chhattisgarh to the north-east and Odisha to the east, Telangana comprises of 10 districts namely Hyderabad, Adilabad, Khammam, Karimnagar, Mahbubnagar, Medak, Nalgonda, Nizamabad, Rangareddy and Warangal. The rivers Musi, Manjira, Krishna and Godavari, which flow through the region from west to east add to its immense beauty.

Telangana offers a kaleidoscope of cultures, landscapes, legacies, arts and transformations; dazzling in its glory yet humble enough to stay grounded on its feet.