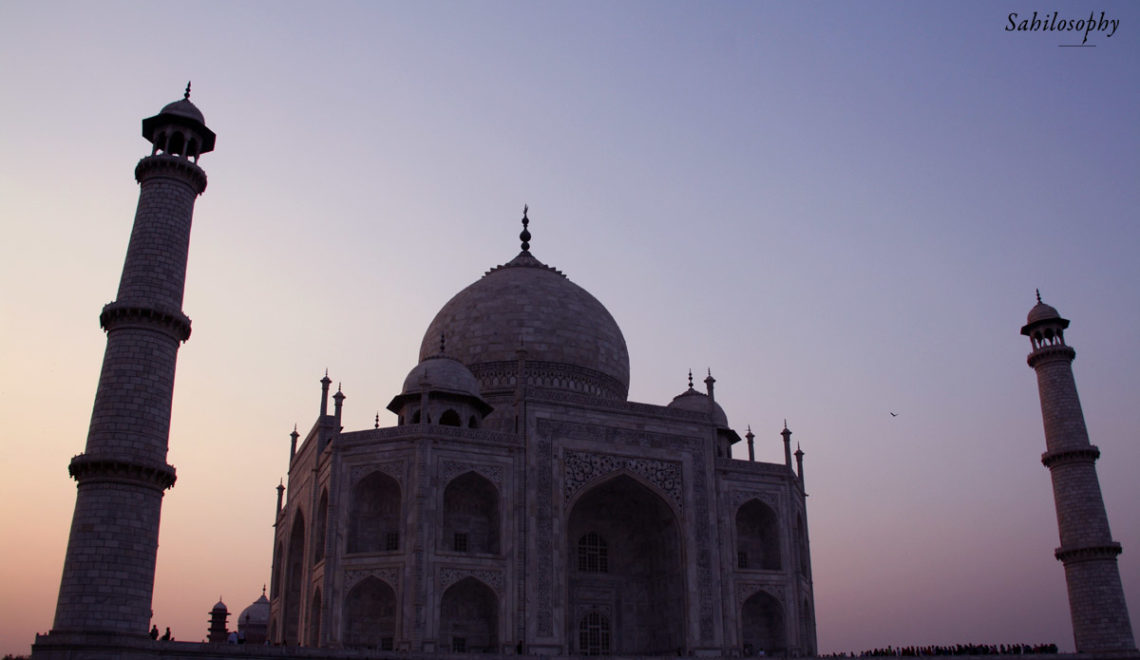 There is something endearing about Taj Mahal. Maybe it’s the name itself, which has come to symbolize craftsmanship of the finest level. Or it’s the grand scale on which it is built. Or it’s the conspicuous status of being one of the wonders of the world. Travellers over the centuries have been coming to Agra to witness a spectacle that rises above the ground in a bedazzling white. The experience is so intense that they get overwhelmed to see a monument that they’ve only seen in picture-perfect postcards. The aura of Taj Mahal before one’s eyes supersedes everything they’ve seen in their life.

It stands majestic below a cloud of dust, like a phoenix rising from ashes. It looks surreal under the pockmarked moon, like a diamond glistening in full glory. The silhouettes mark a majestic drama on its gardens, while the river casts its sway as a fluid romance. Even under a moonless night it glows in blue, an oblique blue that is unacquainted yet intimate. When the first rays of the sun fall on the marbled Taj Mahal, it radiates in soft pink, as if bathing in verses. Under the scorching sun it glistens in gold, but by dusk acquires varying hues of crimson. It becomes pure in the rain, its beauty accentuated by the open pores. Anytime of the day or any day of the year, Taj Mahal looks splendid, magnificent and grandiose. The changing hues portray the myriad moods of a woman, it is believed. It is also said that in the Mughal context, light signifies the Almighty, thus blessing Taj Mahal in a variety of tinges throughout the day.

Taj Mahal is not just a tomb, it is a man’s grief of losing his wife. It is a symbol of love in its most benign form. It is a collective dream of artists trying to outdo their imagination. It is the architectural brilliance of the Mughals reaching the pinnacle. It is one of the most famous backdrops and grandest settings for dreamy-eyed men to profess their love to their beloved. It is a wish residing in most travellers’ sub-conscious as a once-in-a-lifetime destination to be visited. It is a picture proudly sitting in millions of photo-albums & scrapbooks. It is a nation’s pride and identity. It is a study of perfect synthesis of science & art in architecture. Taj Mahal is not just a sight to be witnessed, but felt through goose bumps. It is a feeling that overwhelms the senses.

P.S. – This is part of the text that features in a coffee-table book I wrote on Taj Mahal called Taj Mahal A Magnum Opus.