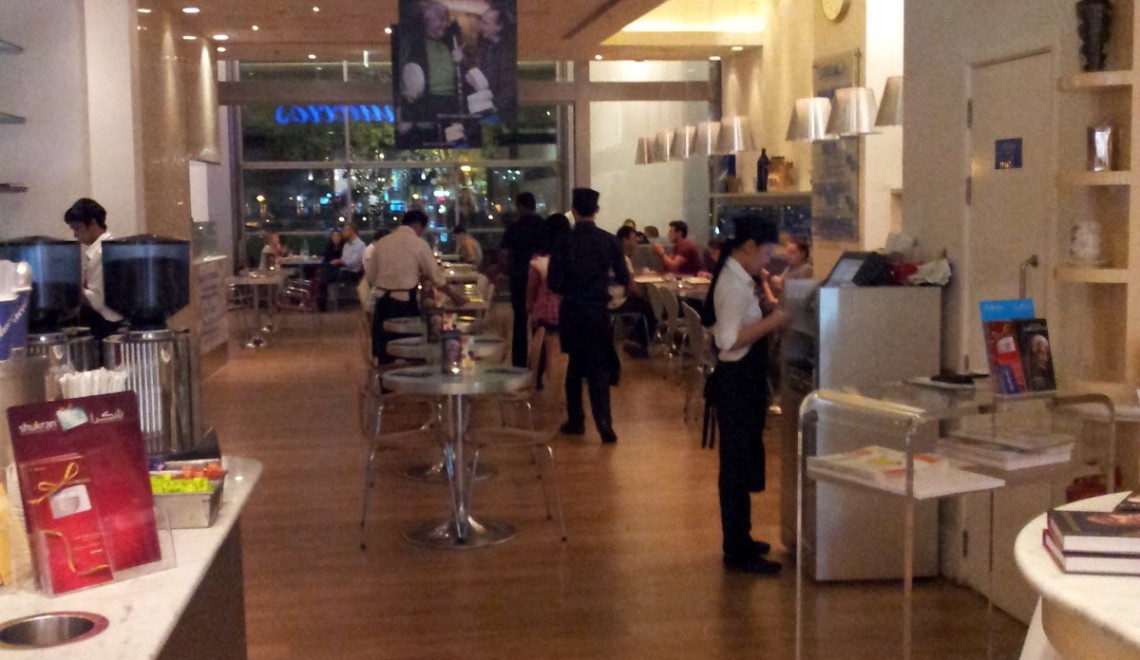 Carluccio’s – Dubai Marina Mall
The trip to a hypermarket is always followed by a quick fix meal because of the tired legs, dizzy eyes and grumbling stomachs. Most of the times the quick fix meals are replaced with full suppers depending on the kind of outing we’ve had at the hypermarket. And also depends on the hypermarket we visit. Closest to us at JLT are Carrefour at Barsha (Mall of the Emirates), Lulu Hypermarket at Barsha, Union Co-operative at Barsha, Spinneys at Al Safa, Waitrose at Marina (Dubai Marina Mall).
If it’s Lulu Hypermarket, then Peppermill is our first and only choice, for its yummiest food. If it’s Marina Mall (for Waitrose), then there is Zafran, Carluccio’s, or Assia in Wok (in food court). If it’s Carrefour, then our first choice would be India Pavilion for its so-close-to-home-cooking style dishes.

While leaving Waitrose with all the essentials we’ve bought for the dinner, our minds wavered once we passed by Carluccio’s. After all, a foodie is a kid-at-heart who is impressionable, tempted and always hungry for a delicacy. We looked at each other, discussed whether it’s Zafran or Carluccio’s, tossed, and went inside Carluccio’s world to seek culinary asylum!
Carluccio’s welcomes you with its organic store first, which is well laid out and too alluring to not buy anything. The pastas hang on a bamboo stick, an open market format in a retail environment. Other stuffs include sauces, breads, entrees, books, basil plants, raviolis, coffees, herbs, olives, sweets, and even mortar and pestle! Everything was well packaged, another reason you wouldn’t resist buying.
The ambience makes you comfortable at the sitting area. The place is huge, and the things they’ve kept like bottles, jars, bags etc again keep you glued. And if that wasn’t enough, there’s live counter as well. And if even that’s not enough, they’ve got Wi-Fi too!

Since we were not too hungry, we settled for their combo that had an entrée and a main. So Bruschetta and Pasta Arrabiata for us. Though we were waiting for a good portion of bruschetta, we were surprised to see just one piece of bread topped with big chunks of tomatoes & bell peppers and few herbs by the side. The pasta looked great, and on digging, proved to be what we took on its face value. Delicious to the core, it had the perfect tanginess that a ‘spicy’ dish would claim, replete with each ingredient reckoning itself in the mouth. We sprinkled a generous amount of Parmesan on it though, since our idea of a pasta is incomplete without the flavours of cheese in it. We would have acknowledged some garlic breads with pasta which is usually the norm everywhere, but wasn’t offered here.  But no complains on that, since the pasta was amazing.

Coming back to bruschetta, it was a dud. The ciabatta bread was well toasted, but that’s the end of it. There were just tomatoes and herbs and no dressing. We requested for balsamic vinegar which added some zest to the bland bruschetta. But the portion was too small, as in just one piece of bread.
The food ended pretty earlier than approximated, but on a good note. We had made up our mind to be here again to explore their promising menu.

While bidding adieu, our minds again wavered and we explored their organic store. After much consideration, we bought their pasta sauce. It looks good, and can create the same pasta at home I guess, if we don’t feel like driving down to Carluccio’s that is.
CarlucciosdubaiItalianMarinarestaurant
Leave a comment