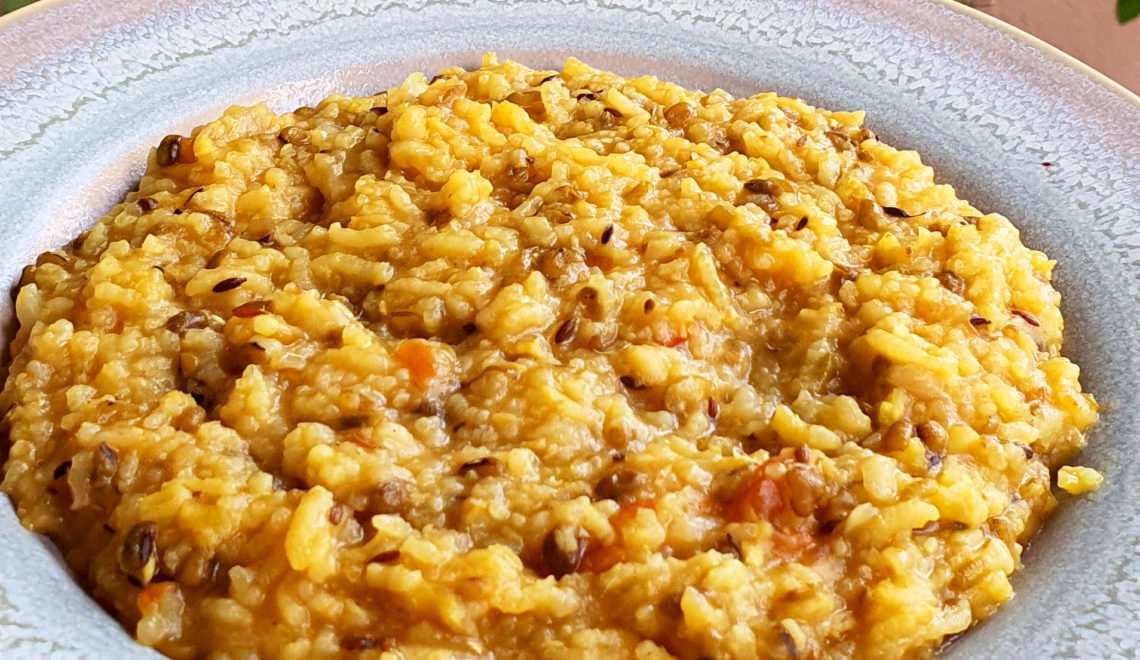 Khichdi is not just a dish, it’s a feeling…the feeling of home. In North India, it’s strictly limited to home cooking only, since I never saw it on any menu of any restaurant (it might be available somewhere, but culturally it’s not part of restaurant menus). But later when I travelled to Mumbai, I saw Khichdi in many vegetarian restaurant menus. Even in Dubai, one can get Khichdi easily at Indian restaurants.

Khichdi is the unanimous comfort food. If you can’t think of anything, then Khichdi is an easy choice at many households, as it’s a single pot recipe. Every state has its own style, though the base remains almost same – lentils & rice pressure-cooked together with spices and veggies. Though the Yellow Dal Khichdi is most popular, many try variance with other lentils. Heck, even the rice used for Khichdi is special – it’s called Khichdi rice (it’s cheaper than Basmati, so also a choice for households on budget). We depend on Khichdi even when fasting, using Sabudana instead of rice. Khichdi is the first solid food fed to babies as it doesn’t need a bite (it’s runny, can be cooked without spices and easy to digest).

I know why Delhi doesn’t have Khichdi on restaurant menu. Because Delhi is too snooty to have such a simple dish on the menu, which is otherwise called ‘Bimaar ka Khaana’. Which means Khichdi is served mostly when you are unwell. Part of it is true, but I think Mumbai aced it with their variety and extra tadka Khichdi, which makes it more suited for the palette than gut! They even have a Prawn Khichdi, which makes this vegetarian delight appealing to non-vegetarians too. The Gujarati version has a Kadi alongside while their Khichdi is whitish. I haven’t travelled well across India to tell how other states serve Khichdi on their menu, but the ones I have had at friends’ homes are equally interesting (Like Bengali, Gujrati, Haryanvi, Garhwali, Bihari etc).

Khichdi is part of India’s history. Even Mughals loved the Khichdi before bestowing us with the recipe of their Biryani. The British cloned Khichdi to suit their tastebuds with Kedgeree, and Egyptians too have a similar dish called Koshari. Since it’s a single pot dish wherein people add in anything they love – a variety of vegetables. That’s why it’s known as a Mess/Potpourri in colloquial terms.

Here is a simple version of Khichdi, which I learnt from Saloni during Lockdown, when there was more time to cook and I went into learning the basic recipes. Khichdi doesn’t require much spices if you’re cooking a simple one. The main ingredients are ghee & ajwain. Basic prep – In a small bowl (katori), add 70% rice and 30% lentils. Soak them in water after washing.

You must have Khichdi with yogurt & achaar; or any vegetable curry you might have, because Khichidi is universal, it goes with anything!