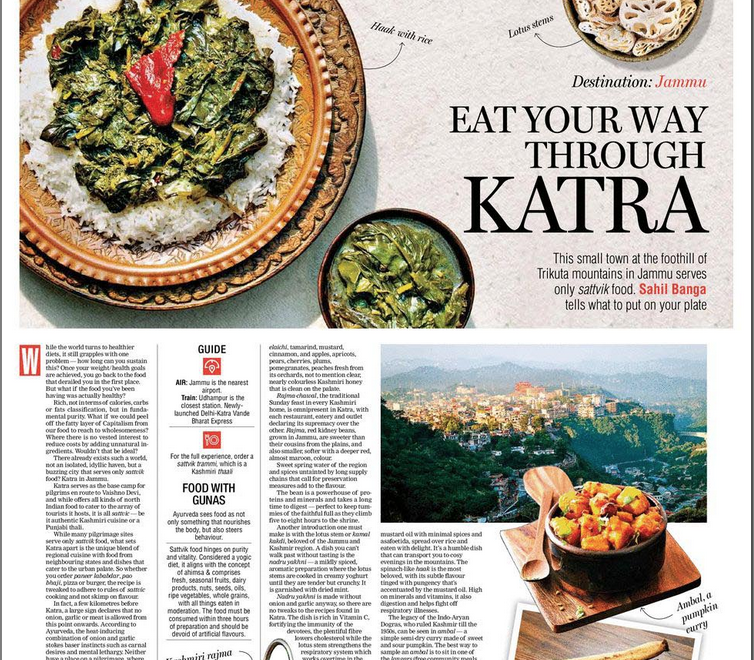 This article was my first foray into a National Newspaper called DNA India. Published on 6th October 2019.

We all are seeking a healthier lifestyle in a world where 24 hours seem less and work unending. The more we work, the lesser we workout! And the only refuge we find is in food, which makes the matter worse. No matter which part of the world you live in, there is always some ready-to-eat food to tempt you. Much of the world’s problem would have been sorted had our food been unprocessed, fresh and healthy.

While the modern world turns to healthier diets including keto, atkins, LCHF, paleo, vegan etc., it still grapples with one problem – how long can you sustain this? Once your objectives are achieved, you would go back to the same food you’ve been having. What if ‘the same food you’ve been having’ was actually healthy? Not in terms of calories, carbs, or fats classification, but in the sense that it is pure and devoid of impurities. What if we could strip off the thick layer of Capitalism from our food and ripped it to bare minimum of wholesomeness? Where there is no vested interest to reduce costs by means of adding unnatural ingredients to make it on-the-go easy and delicious. Wouldn’t this be an ideal world to live in? What if we told you there exists such a world, not too far or isolated to be idyllic heaven but a buzzing city that welcomes every person with open arms and Sattvik food? If you haven’t guessed it yet, it is Katra in Jammu.

To understand the food of Katra, one must understand the concept of Sattvik. We all know that Sattvik is pure vegetarian food, just as is Vaishnav food. But there is more to Sattvik than just the pleasant sounding name. It stems from Ayurdeva, the science of medicine that traces its origin to prehistoric times, often cited in ancient literature. It’s also regarded as Yogic diet according to modern literature. Ayurveda classifies food in three broad categories – Sattvik, Tamasic and Rajasic. These are not merely food categories, but philosophies that segment qualities & traits (gunas) termed as Sattva, Tamas and Rajas. While Sattva is the ideal quality that means pure, energetic and wise, so is the Sattvik food that hinges on purity, vitality and wholesome.

The three diets have their own advantages and objectives. Tamasic food decreases the energy of the body and makes it dull and lazy. The ingredients listed in this sedative diet are onion, garlic, meats, mushroom, alcoholic beverages, stale food etc. Not only Tamasic food is harmful, it lowers the consciousness, which is why this static diet is deemed appropriate after war and stressful times. Rajasic doesn’t carry such excesses of insignificance yet is considered harmful as it triggers aggressiveness and provokes mental restlessness. The stimulant food in this diet includes caffeinated beverages such as coffee, tea, cola drinks; chocolates; spicy food; salt etc.

Sattvik food also aligns with the concept of Ahimsa, trying not to cause any harm to any living being. The regimen of this diet relies on seasonal foods, fruits, dairy products, nuts, seeds, oils, ripe vegetables, whole grains, and all things vegetarian and fresh, eaten in moderation.

Eat your way through Katra

This small town at the foothill of Trikuta mountains in Jammu serves only sattvik food.

While the world turns to healthier diets, it still grapples with one problem – How long can you sustain it? Once your weight/health goals are achieved, you go back to the same food that derailed you in the first place. But what if ‘the same food you’ve been having’ was actually healthy? Not in terms of calories, carbs or fats classification, but in fundamental purity and devoid of preservatives. What if we could peel off the fatty layer of Capitalism from our food to reach to a kernel of wholesomeness? Where there is no vested interest to reduce costs by adding unnatural ingredients. Wouldn’t that be ideal?

There already exists such a world, not an isolated, idyllic haven, but a buzzing city that serves only Sattvik food. It is the town of Katra in Jammu.

Katra serves as the base camp for pilgrims en route to Vaishno Devi, and while it offers all kinds of north Indian food to cater to the array of tourists it hosts, it is all sattvic — be it authentic Kashmiri cuisine or a Punjabi thali.
While many pilgrimage sites serve only sattvik food, what sets Katra apart is the unique blend of regional cuisine with food from neighbouring states and dishes that cater to the urban palate. So whether you order a paneer lababdar, pav bhaji, pizza or burger, the recipe is tweaked to adhere to rules of sattvic cooking and not skimp on flavour.

In fact, a few kilometres before Katra, a large sign declares that no onion, garlic or meat is allowed from this point onwards. According to Ayurveda, the heat-inducing combination of onion and garlic stokes baser instincts such as carnal desires and mental lethargy. Neither have a place on a pilgrimage, where the focus is on devotion and not worldly pleasures. The long trek ahead to see ‘Mata’ requires an alert, energetic body and focussed mind.

Rajma-chawal, the traditional Sunday feast in every Kashmiri home, is omnipresent in Katra, with each restaurant, eatery and outlet declaring its supremacy over the other. Rajma, red kidney beans, grown in Jammu, are sweeter than their cousins from the plains, and also smaller, softer with a deeper red, almost maroon colour.

What adds to the flavour is not just the omission of onion and garlic, but the sweet spring water of the region and the spices that are grown locally — untainted by long supply chains that call for preservation measures.
The bean is a powerhouse of proteins and minerals and takes a long time to digest – perfect to keep tummies of the faithful full as they climb five to eight hours to the shrine.

Another introduction one must make is with the lotus stem or kamal kakdi, beloved of the Jammu and Kashmir region. A dish you can’t walk past without tasting is a local preparation called Nadru Yakhni — a mildly spiced, aromatic delicacy which has the lotus stems cooked in creamy yoghurt until they are tender but crunchy. The dish is garnished with dried mint.

Nadru Yakhni is made without onion and garlic anyway, so there are no tweaks to the recipes found in Katra. The dish is rich in Vitamin C, fortifying the immunity of the devotees, the plentiful fibre lowers cholesterol while the lotus stem strengthens the respiratory system which works overtime in the high altitude. The stems are available from Fall to Spring and keep the body warm.

Another local acquaintance one must make is haak, a generic Kashmiri word for a wide variety of greens — a kind of spinach, cohlrabi leaves, radish greens and even dandelion greens — grown in every season.
In the homes of Kashmiri Pandits, whole haak is sautéed in mustard oil with minimal spices and asafoetida, spread over rice and eaten with delight. It’s a humble dish that can transport you to cosy evenings in the mountains. The spinach-like haak is popular for its subtle flavour tinged with a pungency that’s accentuated by the mustard oil. High on minerals and vitamins, it also aids digestion and helps fight off respiratory illnesses.

The legacy of the Indo-Aryan Dogras, who ruled Kashmir till the 1950s, can be witnessed in ambal — a simple semi-dry curry made of sweet and sour pumpkin. The best way to sample an ambal is to sit in one of the langars in Katra, and mix it with rice and rajma.

If you are short on time and want the best of Katra on a platter, order a trammi or traem —  a platter of four to five accompaniments to rice, local breads and salad. The Kashmiri style of plating is to serve it on an intricately carved copper plate with a lid (sarposh). In a sattvik trammi, you can expect a kofta curry, nadru yakhni, rajma, dum aloo and haak — all that will fortify you for the trek ahead and make you hurry back down for more.

You will find all the regular dishes in Katra that you’d find in any restaurant or dhaba in North India. The pilgrims mostly from North India wish to have the regular food they get back home, hence the restaurants in Katra do brisk business adding these standard dishes in their menu. You don’t have to go too far to get Paneer Lababdar, Dal Makhni, Paneer Butter Masala to even Pav Bhaji, Burgers, Pizzas and just about anything. There’s even Dominos, Sagar Ratna, Café Cofffee Day, Baskin Robbins and other chains here. But they would have a tweaked menu with no onion or garlic. Which is a big task since they have a set recipe for all their dishes, and to recreate those dishes without onions & garlic can take away the flavours, yet they excel in what they offer! To some it is due to Faith (it’s a pilgrimage after all), for some it’s the food philosophy that they embrace with an open mind.

To the pilgrims who are Vaishno Devi bound, Katra is a very short stay for them, mostly to rest before or after the yatra. Yet the food of Katra remains one of their priorities, a Sattvik diet that does justice to the tastebuds without compromising on flavours in spite of lack of onions & garlic, the basic foundation of Indian cooking. They nourish the body and soul and give another dimension to the otherwise difficult terrain one is supposed to cover. It’s not an easy task, yet food outlets at Katra manage to delight the pilgrims and give another reason for them to return.

How to get there:

Jammu airport is about 50kms from Katra where taxis and buses are widely available throughout the day or night.

Katra Railway Station is well connected by trains across India. Delhi to Katra train journey takes about 10-12hrs, while from Mumbai one has to reach Jammu Tawi Station on a 30hr journey.

Located about 2,800ft above sea level, Katra is an uphill drive from Jammu, while the 14km trek to Vaishno Devi gets even higher as the temple is perched at 5200ft., which pilgrims cover in about 14hrs.

The colder months of October to March are best to enjoy the scenic hilly town. The place though gets busy & crowded during Navratris, but one can witness the enchanting festivities as the town gets decked up in the celebratory mood.