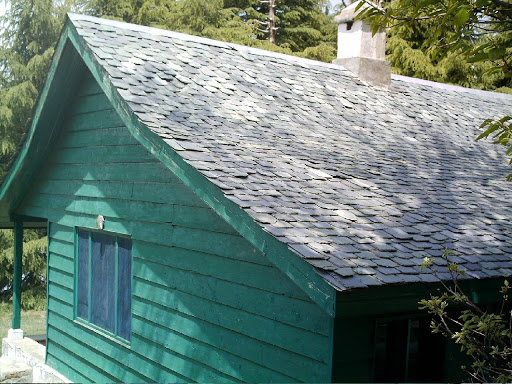 An Overlap of Real and Surreal

This article was published in Airport Authority of India’s monthly magazine called Aiports India, in their August 2019 issue (click here for the e-magazine). 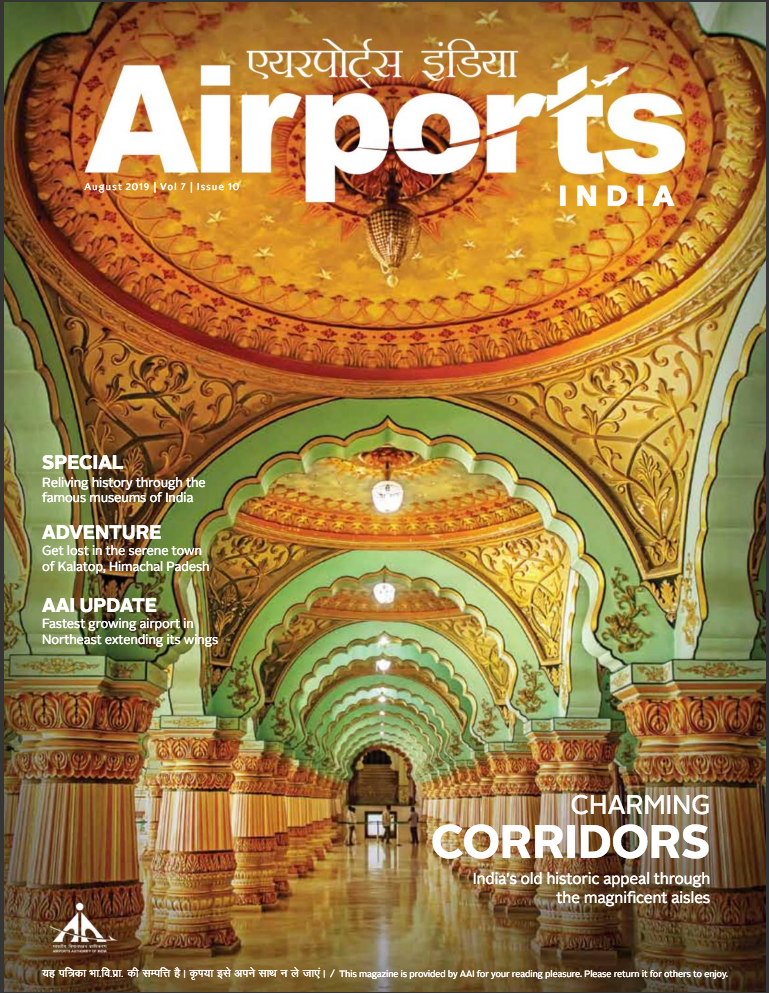 That we took the wrong route, no issues, that we had a hard time with the submerged bridges and treacherous marshy routes as alternates, no problems, because once we reached Kalatop, it was all worth it.

Nestled in the virgin parts of Himalayas, Kalatop is an 8km vertical drive from the small but quaint Dalhousie (Dist. Chamba). The steep uphill drive gave us the view of Dalhousie, often shrouded by the changing mysticism of the mist. Leaving behind the cacophony of bazaars and towns behind, as we reached the gates of The Kalatop Wildlife Sanctuary, we gasped. The air had become crisp, cold and refreshing.

After entering the gate of the forest, we bid goodbye to the Lakkar-bazaar that charmed our vision outside the entrance. And a muddy track welcomed us, which snaked through the thick forest that boasted of abundant Pine and Deodar trees. The 3km stretch of canopies ended at the gates of heaven – Kalatop Forest Guesthouse.

The grandeur of this place lies in its desolation, and is accentuated by the serenity that transcends even its alpine heights. Caught in a time-warp, Kalatop Forest Guesthouse is testimony to the fact that vintage is as charming as it could get. The chalets here have a bloodline descending from the British. Built in 1925, these chalets must have been the architect’s realized dream. 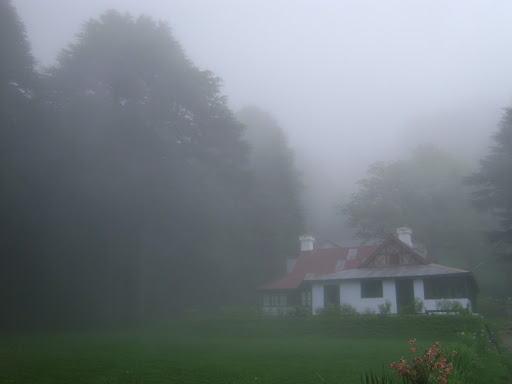 The Chalet has 2 rooms (separate) and a lawn in front of it. Flowers bloom in full splendor, and in different varieties as well. This was the sole purpose of Himachal Forest Dept. to rent out these chalets – to promote eco-tourism. Sunflowers beautify this place and make it more heavenly.

When the real and surreal overlap, there’s bound to be an extravagance of heaven. An overdose of ecstasy. This is what we experienced when mist enwrapped this place like poetry dissolving into spurts. Like existent giving away to surrealism. We could see the mist forming from far away, under the hills, shrouding those tiny wooden houses that rest in serenity. Then the gait of the mist changes, expands everywhere, and starts coming onto you. You can either hide in your room sipping Adrak Chai or your homely brew of cappuccino. But then, what’s the fun of not welcoming something which is rushing forward to meet you with all the zest, all the happiness and excitement. Believe me as I say, there’s no feeling that equals to mist coming onto you, baptizing you, purifying your senses. As clich’d as it may sound, it cleanses your mind, body and soul.

My sole purpose of coming to this place was fulfilled, that of taking a break. I’d not shy away from saying that I don’t have loads of work or loads of parties to keep me occupied. So taking a break meant purifying my senses, from the cacophony of traffic which has crossed the allotted decibel level, from the dust haze that has not only become an eyesore but made me irritatingly restless as well. And Kalatop was the respite, perhaps heaven of sorts.

The huge complex houses just 3 chalets, which sums up 6 rooms in all. But then, that’s why this place is so beautiful and serene. After the sun drowned past the horizon after a hectic day playing peek-a-boo, the crimson sky started dissolving into the hues of blue and purple.

Coming here also meant recollecting long-lost memories, catching up with lost gossips, rumors, hang-ups and screw-ups, and everything in between. After all, we don’t get to meet friends everyday. Perhaps months! Such an irony, I thought, sometime when we were young and restless, friends were just a house or colony away. Then came a phase when they were just a call away. And now, these days, they are just a click away. Always there by you, through every thick and thin. Waiting to be disturbed, in a small link that shows up on the left of your mailbox, or smiling from a small icon down right on your monitor. If you think I got pensive or philosophical, blame it on the place and weather.

The purple sky now turned ink blue. The stars which were distant now were just a few light years away, dazzling in a new avatar. The child in me wanted to jump and catch that shooting star, pick few stars and stick them on my ceiling, getting rid of those faux pas stars.

The chill had settled in every nook of this forest. The conversations weren’t going to end. So we called for food, and coffees. The food was different, being pahadi khaana, and simple as well. Though in this kind of weather, and in hills, I miss Kahwa (Hot, Saffron & Spice laden Tea from Kashmir). Nevertheless, we brought out the quilts (it still was summer though) and snuggled close to each other. Conversations flowed like a Bordeaux wine.

The moon threw light on those peaks and painted them hazy blue. The silhouettes of the mountains and trees called for another peg of Rum (and Brandy for those seriously shivering). It looked like an artist’s canvas, very dark, yet suggestive. A story woven through petty things like an owl spying in its frivolous flight, a snake hissing camouflaged in a tree’s trunk, some rats prying, dogs snapping at the rustles of the leaves, air brushing past the trees. The canvas was complete, lock, stock and barrel.

Before we could freeze, we went in the room and slept. The chalet were wooden, interior subtle yet vintage. Nothing like a good night’s sleep, tucked in quilt, moon teasing you from the window, comfortable pillows whispering lullabies, dreams inviting you to another world, a world very close to where you are right now. Bliss!

Next day, we woke up with an animated spirit. With this kind of spirit, one would indulge in adventure sports. But there weren’t any scope for that. So we did nothing.

Well, nothingness has many facets, aspects, branches and sub-branches. Doing nothing meant long walks through the wilderness. Discovering en-route cherries, foot steps, paw marks. And off-route, wild berries, greenery and a hope, of arriving at a magical land, a hamlet maybe, maybe a waterfall, a barn, a pond, or who knows, we might find a tribe celebrating a new birth, praying to the sun god, dancing to the drums, eating exotic fruits. 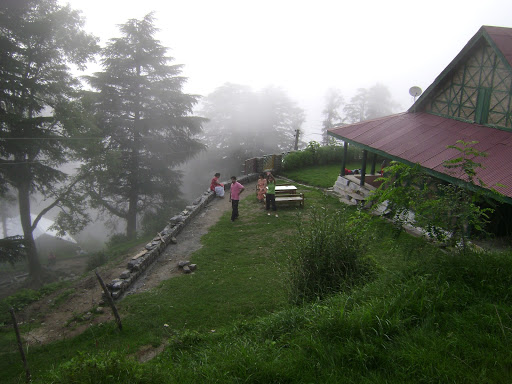 Doing nothing also included listening to croaks and hums and other voices of flies, birds and animals. An experience different altogether. This cacophony was music to the ears. Buzzing, it still was tranquil. Feeling closest to the nature, we kept quite for a long time. Some friends basked in the sun. Some played badminton. Some sang songs of yore. Some told tales of ghosts and spirits, and the long history of mountains and their proximity to the unheard world.

Well, this was nothingness. And another night, another bottle, and endless conversations. This time we ordered Maggi noodles, and were content with life. This is life. We had life revived. We caught-up with nature at its surreal best. We got back the zest that was missing. But the proverbial truth came knocking on our doors, all good things have to come to an end. So with heavy hearts and fresh faces, we left heaven.

Route: It”s 80kms from Pathankot (few kilometres before Jammu, via Jalandhar). For reservations, you will have to book it in advance, through the D.O. of Forest Deptt., Chamba, which can be done over phone at 01899-222639. The uphill drive is just around 50kms, which starts after taking a right turn from Pathankot Bypass. 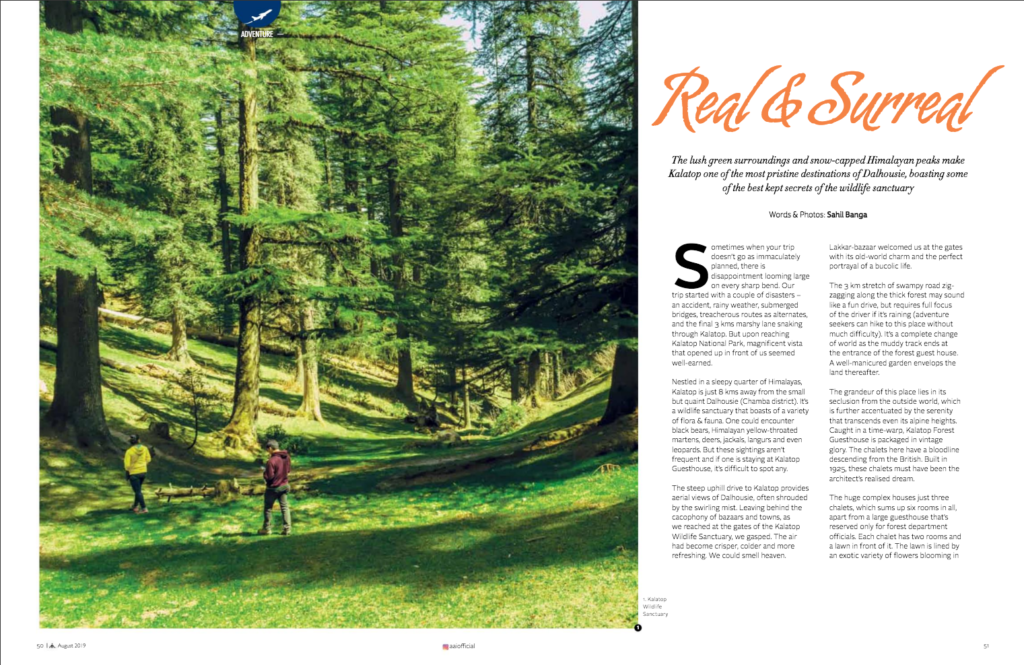