In & Out of Karachi Inn

Karachi Inn was referred to me by a foodie friend at an event, whose advice I took quite seriously. Albeit he didn’t spell the name correctly, nor gave right directions. After 2-3 attempts at searching for this place in Bur Dubai (Meena Bazaar) over a period of few months I finally found this restaurant in some godforsaken street which is actually close to the Dubai Museum and Bastakhia. Parking is a major deterrent to reach this place.

Since I was suggested to have Biryani, I didn’t look at the menu and straight away ordered a Chicken Biryani. Waiting for my order, I went through the menu in detail and wanted to order everything off it, but better sense prevailed and I just added Shami Kebab to my existing order. 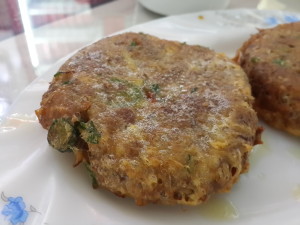 Whiling away my time, I realized this place was similar to Karachi Darbar in concept, food and pricing. Since these kind of budget restaurants are usually low on details, I was impressed by the staff’s dress: black waistcoat over white shirt with a hat. The staff was friendly and warm. The guy serving me was genuinely concerned about my order, and kept repeating in intervals that my order is just going to arrive. He was enjoying his work, so were others, which is such a good thing to see. Because just smiling and being courteous isn’t their job. They have to be happy about what they are doing, please the customers with their suggestions and friendliness. And this is where Karachi Inn scores. It captures the true sense of ‘Khidmat’, the art of serving. These guys were refilling raita for customers every now and then, without anyone asking for it. 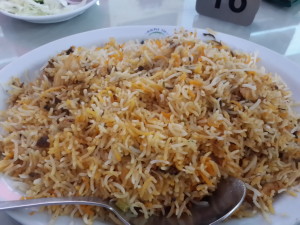 The Biryani was good on flavours, thanks to the khada masalas used. I could see and cinnamon, cloves & peppercorns, which I picked and kept on side. The Biryani wasn’t high on spices, but was appetizing enough. The only negative was that it was on the drier side. Cooking a damn good Biryani is an art which comes naturally to only a handful of people. Though every Indian or Pakistani restaurant serves Biryani, but I don’t come across good ones usually. Thus Karachi Inn failed to impress me because of that dry rice, otherwise it was decent. The Shami Kebab was subtle and nice, but oily enough to get more negative points than it deserved.

Overall, the service was fantastic at Karachi Inn, food was average (but can be considered decent looking at the price range – 15 dhms for biryani, and rest of the curries too were in this range). I may go there again to sample their curries, as I wouldn’t just write it off so soon. They are in Discovery Garden and Karama as well, and there was mention on a wall poster of their branch in Australia also.