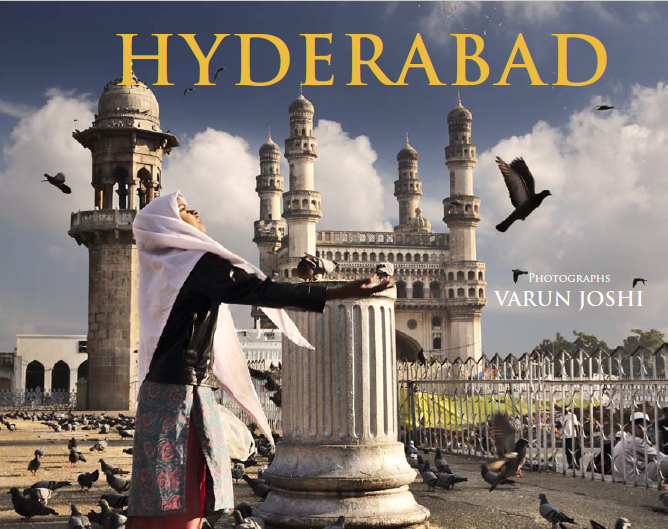 A Coffee-table Book on Hyderabad written in 2012 by myself. Over 4,000 words written for the book, it was released by the then Chief Minister of Hyderabad N Kiran Kumar Reddy.

Title: Hyderabad, The City Born With A Silver Spoon.

Nestled at the crossroads of North and South India (precisely Central South India), marrying the traditions and cultures of both, there’s no city more fascinating than Hyderabad. The erstwhile state, Hyderabad, enjoyed the reputation of being the most prosperous and richest. But the city doesn’t harp on its rich past alone, it has not only adapted to the present, but envisioned tomorrow as well. Gearing up for the future, today Hyderabad is the centre of Information technology. Who would have thought that a princely state bedecked with jewels and stories of grandeur would one day churn out minds that will drive the future? Truly, Hyderabad fascinates.

Hyderabad rises above the clichés. It’s more than a city of fables. There are more facts to the city’s rich legacies than myths. The city testifies what it claims. The metropolitan is swarmed with stories that date back to 16th century, owing its name to the courtesan turned princess, Hyder Mahal.

The City of Contrasts

Wax eloquent about the city, yet it seems less. Such is the charm of the city. It cannot be summed up in a line or two, or a fable or two. The city is an endless verse, an infinite prose. It’s a city of contrasts, where traditions and modernism co-exist in perfect harmony. While one is immersed in history, the other gallops towards the future. While there are monuments jostling with malls, burkha-clad women on the road contrast geeks fiddling with their smartphones at the cafes. The city is home to IT companies and industries, as much it is to minarets. The air is pregnant with the whiff of decadent biryanis and kebabs, as well as coffees and pizzas.

The city is an eclectic mix of cultures and sub-cultures that followed, absorbing, synergizing and adapting to everything, yet retaining its identity. The potpourri of languages, religions and cultures, Hyderabad shines above the psychedelic shimmer of nobility. It’s the epitome of passion.