How I Met Your Kakori

It’s very easy to start with something, yet not continue. Like a revolution that kick starts with a lot of pomp & show and hullabaloo but fades away as fast. Like an idea that evokes stimulus but vanishes into thin air when it comes to execution. This blog also was an attempt from me to write on food, my raison d etre. I am such a foodie that even a stomach upset cannot deter me from trying  new food or having a spicy meal. I’m such a foodie that once the Creative Director of my agency made me realize that whatever landmarks I give of a place, are usually restaurants!
In fact, there are many many reasons why I consider myself a very big foodie, but then, that would need a blog specifically on the subject. By the way, I even landed up with my dream job, writing on Delhi for a mag that’s just about Delhi – art, food, people, culture, et al. But then, the money they offered was what I was paying my house rent! Even my dog would have kicked me out of home had I accepted that offer. After all, why would he settle for milk-bread instead of meat?
When I started with this idea of food writing, I went berserk jotting down my favorite restaurants, dhabas, thelas, stalls…to be reviewed. Soon after, I went about shooting images of the places. There was one eatery which even stopped me from clicking pictures of their place, yet I clicked stealthily. After all, my readers, who are just 2-3 in numbers I guess, should see the place virtually to get a feel.
But jotting down the story was the main issue, which I guess every once-startled-now-disinterested blogger would quip. The main reason is not laziness, but the mood. Yes, the mood. I mean imagine, you go to your favourite restaurant, come back all charged up to write what you just experienced. The story is good so far. But, if you don’t write because of time paucity or some other engagement, then it would be very difficult to write with the same fervour, and mood. That’s why even writing fiction is difficult, because you need to get into that world, those characters, and feel that way. It’s like an actor’s job who has to slip into another character effortlessly. I have an unfinished novel which doesn’t even feature in my to-do-list anymore.
This post is not about the perils of writing or cribbing-of-a-food-writer, but on a restaurant that has got the best kakori kebab and mutton tikka in Delhi. Yes, best! Trust me on this.
So the story goes like this. One day I was just roaming around in my car, alone, listening to music…typical of a Delhi-wallah who feels one can waste petrol rather than waste more money at those coffee-shops. And why not, we’ve got such a beautiful, green city with wide roads that are a joy to drive at night.
So, the story of how-i-met-your-kakori. Coming from CP, I took a right from Nizamuddin roundabout. There are many small eateries there on the left side in the densely populated Nizamuddin area (famous for Karim’s), which I have tried few times but was disappointed. But being a hopeless foodie, I again wished to try a small stall as there was quite a queue up there. I have tried the eateries in the small lane going into Nizamuddin Basti, but had never tried this eatery on the main road. So my stomach said, “Go ahead dude, I will take on the spices.” 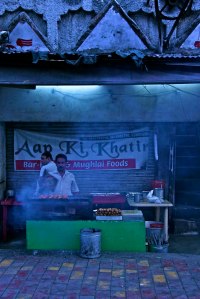 I parked my vehicle outside the ‘restaurant’, I’m not sure if I have to call it restaurant as it was a mere barbeque stall in the compounds of a tyre shop that’s shut after 7. Nevertheless, as I approached the counter, the aromas of the masalas wafting everywhere filled my olfactory senses to the limit that I had to gulp down the saliva several times.
I read the name of the eatery and laughed to myself, as it reminded me of Himesh Reshammiya. And the name was – Aap ki Khatir. Imagine Himesh crooning his song here, in front of a drunken audience sitting on tables laid on pavement. Perhaps it’s the drunken audience only who can bear his songs, or maybe appreciate when sloshed.
Like a typical Delhi-wallah, I too got hold of a server, and started the whole story of how my food should be perfect, and have lots of masala, and the chicken should be tender, and the chutney should be tangy, and there should be lots of onions on the side. And then the general question-answer round followed – what’s the best you give, when was the restaurant started, what are the timings? (On second and third trips, we’d also start asking how much the owner rakes in, what is the rent of the place, etc.) So he lisped, that too in a nasal tone, “Saab, Kakoli kabab khayenge kya”? It took me a while to understand his answer, and I gave a thumbs up before that enlightenment.
Okay, before I tell you about the Kakori I had that day, I must tell you about my favourite Kakori till then. It was from Colonel’s Kebab (Defence Colony Mkt). His kebab was mild, oily, little bulgy, also tasted of Zucchini, and light. But when I had this version of Kakori, the Aap Ki Khatir special, I knew for once, this is it. This is how a Kakori should be. This is exactly how it should be.
It was slightly spicy, a far cry from those mild Kakori’s everyone else makes by adding papaya, bottle goard or zucchini to make it soft. And this was even softer than those. Don’t know how, as it didn’t taste of any additional veggie in it. Moreover, it had that tang, which stayed on the tastebuds for long. Though it’s melt-in-mouth, but the spices will make you devour it slowly than hogging at once. I was extremely pleased and impressed. I had found the perfect Kakori in town.
I knew this place was THE place. So I called the bearer and asked him about the menu. Pat came the reply that they have just 4 items in the menu – Kakori, Mutton Tikka, Chiken Tikka and Biryani. He suggested Mutton Tikka Roll. My trust in him had doubled and I obliged immediately.
And then came the best Mutton Tikka I had ever had! It was wrapped in a slightly sweet Parantha, so to balance the spices. And it was a great thing to do, since the tikka was hot and spicy to the core. Quite a mouthful, the mutton was again soft, delicious and very different from the ones you get elsewhere. I know this as Muslim families in the Bihar and Uttar Pradesh belt cook these kind of Tikkas at home, exactly the same, but call it Kebab as it’s very soft, and cut in a different manner. 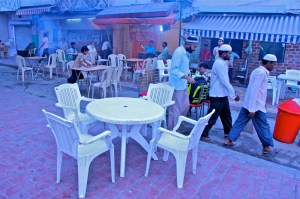 I have had that particular kind of Kebab before, and barbequed too, so I knew the preperation. The meat cubes are stretched and then cut and folded, so as to look like a Tikka. This ensures that masala seeps inside it, and also make it crispier, leaner and softer. And the masalas that go inside are not just ordinary masalas. I had to specially go to wholesale markets to source few masalas that I never knew existed.

Back to Aap Ki Khatir. The Mutton Tikka brought back the memories of that ‘Kabab’ I had loved so much. But having with this sweet Parantha was an experience. Add to it their spicy mint chutney and onion rings. Even Thumbs Up couldn’t douse the fire on the tastebuds.
The sweet Parantha concept is again not new to Awadhi cuisine, but not much utilized in Delhi. One hardly would get that Parantha, also called Ulte Tawe Ka Parantha, as its very thin, longer, cooked like a roomali, yet tasting like a Parantha ‘coz its fried. Don’t know exactly how they make it sweet, maybe they add milk and saffron to it. I have only eaten these paranthas at Awadhi or Lucknawi joints, which complement their Galauti Kebabs and Shaami Kababs perfectly with them.
So I reached to the conclusion that Aap Ki Khatir has got the best Mutton Tikka and Kakori Kabab in town. And what justifies Aap Ki Khatir’s mercurial rise is that it opened an outlet in Khan Market. For the uninitiated, Khan Market is the most expensive market in the whole country, property rate wise. And there it was, Aap Ki Khatir, a standing eatery, which was paying over a lac per month! Yes, being a Delhi-wallah, I did fish that information from one of their boys. So one can imagine the quality of his food.
But I still loved going to the Nizamuddin eatery, as it had the perfect setting for that kind of food – rustic, old-world, downmarket! Moreover, it was fresh out here, as they used to just warm the food at Khan Market. By the way, the Khan Market eatery is closed down now, damn the sealing drive by MCD. 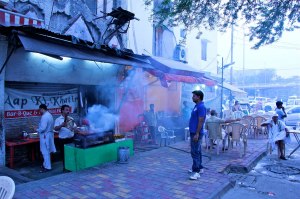 On my subsequent visits to Aap Ki Khatir, where I took all my friends and acquaintances, I founded that only these two items stood out among their growing list of items. And I stuck to it with all the discipline.  Best way to have them is park your car there, remain seated in the air-conditioned car, order food, play Ghulam Ali, pour Buddha Baba and coke over ice in plastic glasses, and savour the heavenly ambience with friends. Nothing complements spicy food than Buddha Baba. Satya Vachan!
Beware: Some family feud led to opening up of two eateries at the same place – Aap Ki Khatir, and believe it or not, Sab Ki Khatir. The former is THE one. Sab Ki Khatir is awful. So when you go there and the bearer arrives, just tell him strictly that you want to order from Aap Ki Khatir only.
Location: Just before you take left for Jungpura, coming from Nizamuddin roundabout.
Call Mohammed Ashfan (9818989786, 9810764449) for directions.
Timing: Evening around 6:00 till 11:00.
Price: It’s tad expensive than its counterparts, but then, worth it.
Rating: 4/5 (Deducting 1 point for not being a family place and parking issues)
delhikakori kebabreview
4 Comments