Hail the King of Kulchas 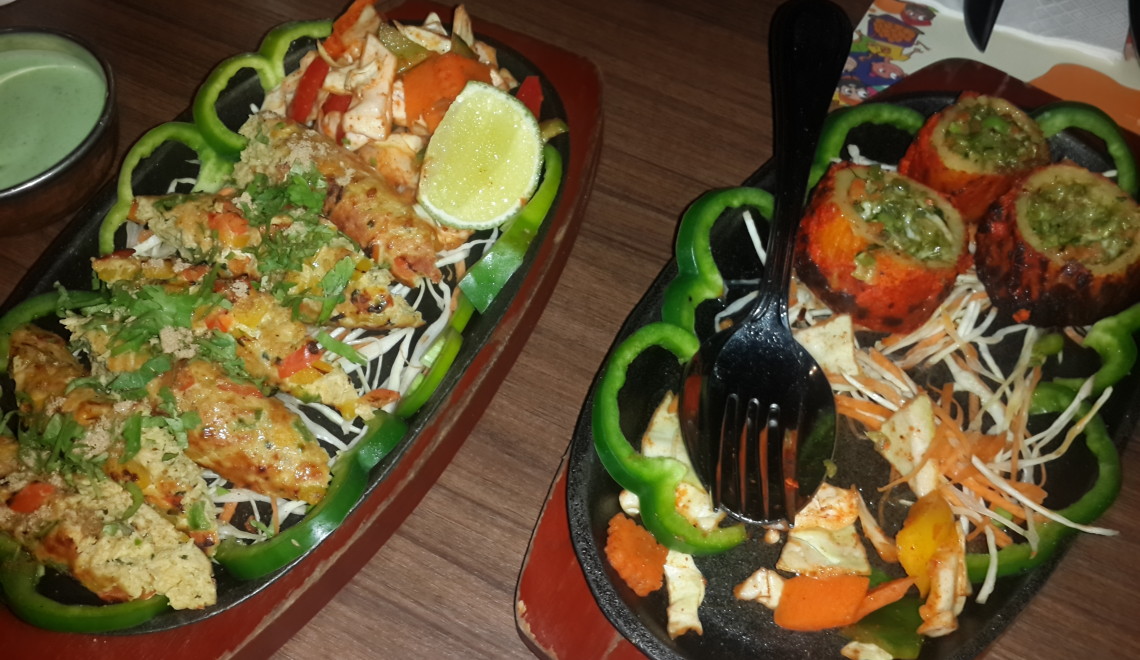 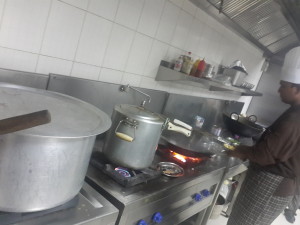 The crackling of spices, the swooshing sounds of tadka, the frenetic chopping of crisp vegetables, the beating of dough, the pendulum kind of effect between hands as they toss the bread before sticking it inside the clay oven, the titter tatter of plates, the frenzy of a well orchestrated teamwork, the heat of burners and ovens, the occasional flames that rise beyond belief during tadka, the constant stirring of currie 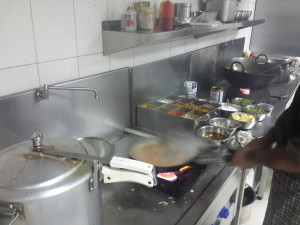 s, the rich dousing of butter on breads, the fragrant tea coming to a boil, the cautious handling of food in a tray, the generous garnishing of chaat masala, onions and coriander on curries…the kitchen of Kulcha King is a treat to all the senses. It’s a salivating experience!

Fortunate to enter the kitchen of the famed Kulcha King, JLT, the whole experience of knowing how our food is cooked was overwhelming for me and Saloni. We wanted to understand the madness that happens behind the scenes, how hourly battles are won to dish out meals that are instagram & drool worthy, how every order warrants its own moment of frenzy, and who are those people who pour not just butter but a lot of passion in our Kulchas and induce addiction. 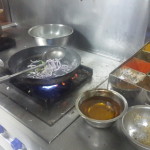 Invited for the tasting session by La Pear Societe #WeThinkFood, the amazing PR agency whose representative Jyothi made sure we get all possible information and see behind-the-scene action. Kulcha King’s team was gracious enough to allow us into their kitchen, then serve us the most delectable items off their menu, meanwhile their manager patiently answered all our queries related to their Kulchas, food scene in Dubai, the Amritsari cuisine, etc.

Despite being ultra busy, the kitchen was super clean and very well organized. The Kulchas are cooked on order only basis (not on constant rotations) as they believe that even a 10 minute old Kulcha shouldn’t go out of the kitchen. Bringing it hot off the oven is their specialty, even if it means that the customers have to wait for 15-20 minutes for the same (although a frustrating wait if 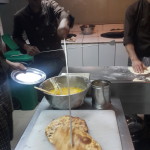 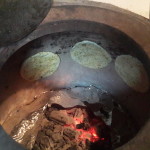 d grumbling stomach). They even chop the veggies every hour so the crispiness is retained, and the dough is also kneaded hourly. It takes a lot to deliver constantly the same quality, and Kulcha King is undoubtedly the King of Kulchas.

After stepping out from the kitchen, we were served a chilled Mango Lassi to wade away the heat. I don’t drink lassi, but I tried it on chef’s recommendation, and I am proud to declare that I can drink Lassi now! It was very thick, mango’s flavor coming out very well (even though it’s off season), and didn’t have those gra 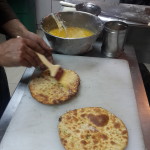 iny particles which usually put me off (those malai scrapes if you know what I mean). Though be warned, the Mango Lassi is so thick that after drinking it you might not be able to finish off your order. I would suggest a) share between 2 people b) order it after your meal as a dessert or, c) order it right when you step in, drink it, then judge how much food you can eat thereafter and then order for food!

Since we eat Kulchas all the time, we tried other items from their menu. For the starters, Aloo Angaara and Murg Gilafi Seekh Kebab were served as we insisted for their recommendation. Aloo Angaara is basically stuffed potato with peas and spices, and the yummy cheese. It was a good find, and I am sure there would be many Aloo Angaara I am going to hog in future at Kulcha King. The Murg Gilafi Seekh Kebab is unlike I have had ever, since the seekh kebab also features crisp peppers & onions. Capsicum lends a beautiful flavour onto the kebab, making for a unique concoction. 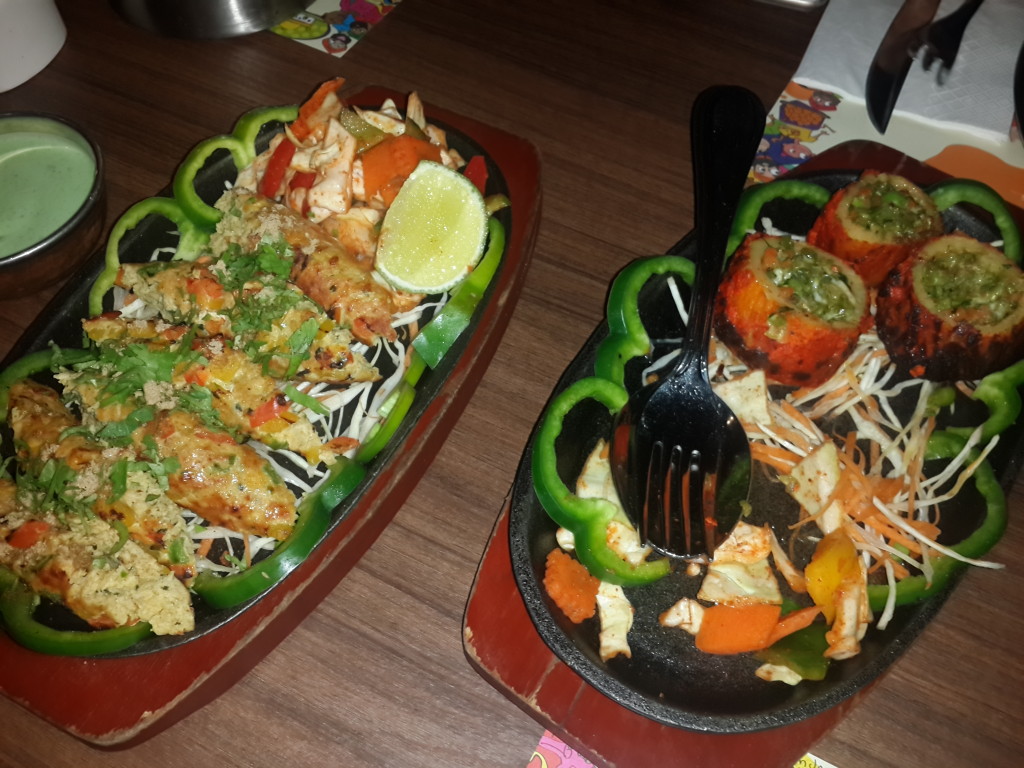 For the mains we had Sarso Ka Saag and Makke Di Roti in veg, Murg Tawa and Keema Kulchas for non-veg. Sarso Ka Saag isn’t an easy one to make even though it’s the easiest to cook. Because of subtlety involved in the flavours. We’ve tried Sarson Ka Saag at many places to our disappointment (barring a few good places), but Kulcha King delivers a punch. The flavour of saag dominates, which is the key. An array of accompanying chutneys is always welcome, but they brought a tray full of chutneys! Their onion tamarind chutney is a hit and must have, but looking at so many chutneys made us inquisitive, our curiosity doused by their servers by explaining each of them.

Murg Tawa is a Punjabi specialty, often seen in the northern parts of India at road side where vendors thump their large ladles on super large griddles stir frying the chicken, throwing about the spices in gay abandon, tossing around the roomali rotis and eventually creating a spectacle. Because it’s mostly available at D 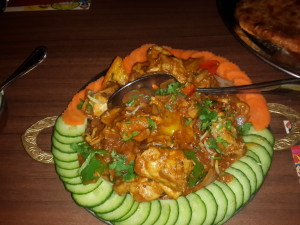 habas and roadside, it boasts of the rawness of spices and awesomeness of Punjabi hospitality and love. It is a dish that is judged every passing day, and many a vendor thrive or strive creating the magic. It is also known as Taka-Tak for the sounds created during cooking. Thus re-creating that magic is not an easy task, but Kulcha King almost manages to give justice to the famed dish. The Keema Kulchas are a weakling compared to the Aloo Kulchas, but the accompanying curry served with Keema Kulchas is another specialty dish in the making, just needs to be promoted more.

For desserts, their Phirni is an all time favourite. We tried Moong Dal Halwa, which is an absolute delight, brimming with graininess which is a must in that. It wasn’t overtly sweet, neither it reeked of Ghee. Perfect for winter nights. The Gulab Jamun is extra soft, which is a rarity and a feat! Though I found the flavour of oil dominating the sweetness of sugar syrup. 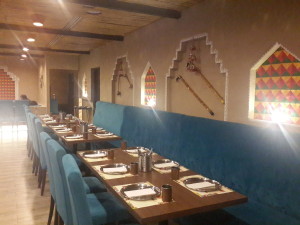 Kulcha King is a success story if you see their growth chart in Dubai. Within few years, they have come a long way with so many outlets opened, and many in the offing. And they don’t have a franchise model yet! One thing which they have started taking seriously is the decor. The Bur Dubai and Karama outlets were just rooms where people lined up to have good food and left. It was never about the whole experience. But now with the refurbished JLT outlet, they’ve created a Punjabi ambience, something to look around while the Kulchas get cooked (15-20mins remember?). There are knick knacks, muddy walls, a truck bonnet, lower seating etc. that are reminiscent of the Punjabi Dhabas. There are other Punjabi cuisine restaurants who have similar decor (Punjabi by Nature is quirky, Pind Da Dhaba is authentic, Patiala House is traditional), but they have focused more on the decor. Which is a good lesson to be learnt from Kulcha King…keep your core product perfect, rest everything is supplementary. 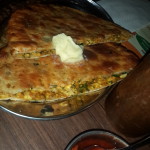 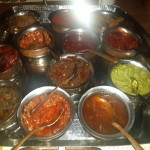 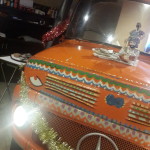