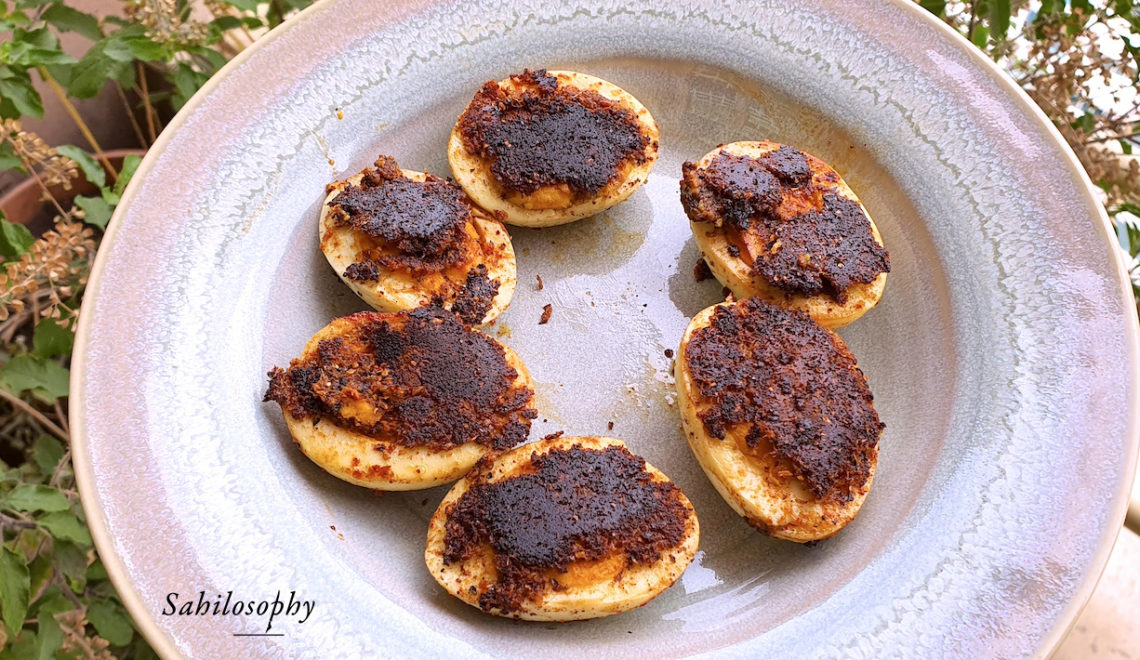 I am always fascinated with the preparations that could be done to eggs. It’s the most versatile dish after all. Though majorly used for breakfast, there are so many recipes that go well into supper. There was a Tamil recipe I stumbled upon long time back which was a boiled egg fry coated with masala. It always stuck to me how easy yet yummy that dish was. For those of you who want to see the original recipe, here’s the link to the blog called Kannamma Cooks.

Since it’s a simple recipe, I tried to cook the same way as per that blog. And it turned out to be amazing. Who would have thought eggs could be prepared this way, at least this North Indian wouldn’t have known this South Indian recipe.

After that first tryst, I tried to cook it again, but thought I could make it as a kabab. Well, the preparation remains the same, just the masalas change, and I took shortcuts along the way to make it quick yet yummy (the original recipe makes the masala mix with whole spices, gram (chana dal) and ginger-garlic). You may follow the recipe, or personalize the masala mix as per your taste, after all, there is no authentic dish I’ve recreated, it’s just a preparation I’ve replicated.

Spices (all half tsp):

Mix the above mentioned spices.

Add ginger garlic paste and mix into a thick paste.

Spread the mix on boiled eggs

Place the eggs facing masala side (that’s the flat side, easy to cook)

And that’s it! Enjoy it with friends & family. The outer layer of masala becomes crisp as kebab, and the whole dish is much like Galauti Kabab (as in texture & look wise).

It’s a simple recipe that takes about 25mins, which includes 15mins for eggs to boil. One thing here, the masala looks dark, though it should be brownish, because I added more pepper than required. You may add some turmeric as well, do away with pepper and add green chilies instead. As I said, feel free to personalize with whatever you have in your kitchen.