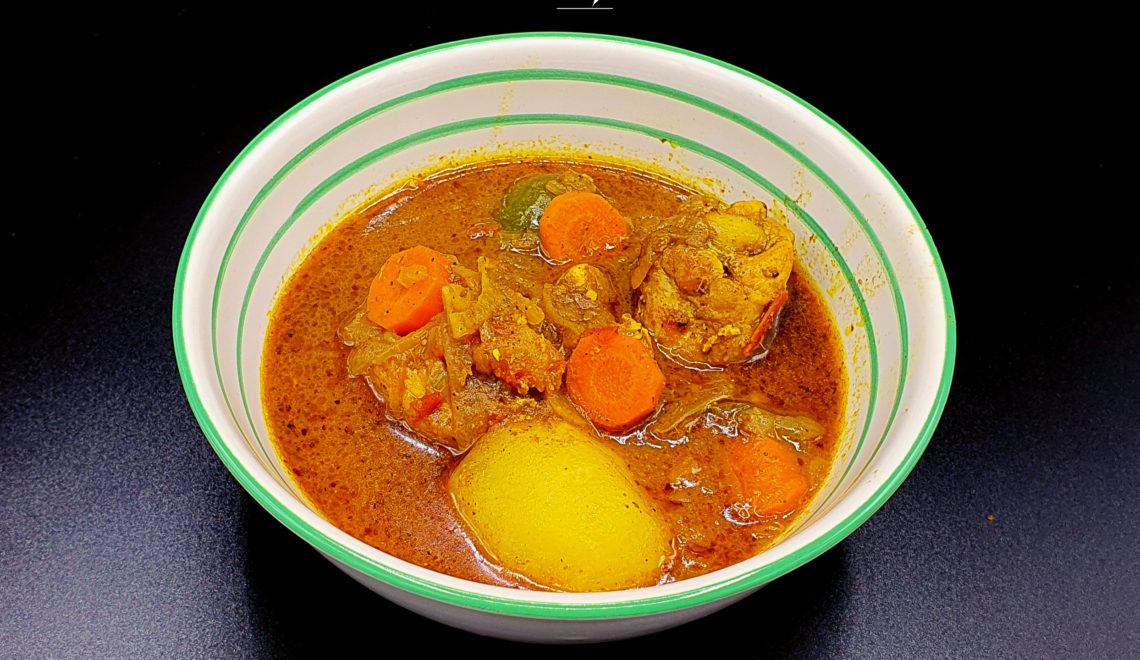 This is my first time trying to cook a Middle Eastern style Chicken Curry. Though every Gulf country has a specific style of cooking their curry, this curry is quite generic and would be like an introduction to the region. What is differentiating from Indian curries is the use of vegetables, so it becomes more like stew. And the use of lemons too. Some countries would use dried lemons in their curry, while some add lemon juice. An Emirati dish known as Dajaj Salona (Chicken Stew) is quite popular, which uses vegetables like zucchini, eggplants, capsicum, dried limes, potatoes, carrots etc.

Going on to spices, they are not too different from Indian spices, only few spices differ like Sumac, which is very popular in the region, has a sour tangy taste profile, often used to replicate lemon, and used as a sprinkle onto any dish – salad, mezzes, barbeque, curry or rice. Then there are generic allspice, like the Garam Masala of Indian Subcontinent. Emiratis use Bezar/Bzar which is their goto spice mix. Baharat is another spice mix used in the Middle Eastern cooking.

I had two spices in my kitchen – Baharat and Sumac. And of course other spices which are common to both Indian Subcontinent and Middle East. I also added two vegetables – carrots and potatoes to make it closest to a Middle Eastern Chicken Curry.

Below is the recipe, which is easy to cook, strong on flavours, and bit tangy due to lemon.

Add tomatoes. Fry until it becomes a paste.

Add potatoes, carrots, capsicum and green chili for another 5mins.

Squeeze in a lemon into the curry.

Add water, lower the heat and cover the pan with a lid.

The chicken is ready. Have it with a Paratha (available at supermarkets as ready-to-cook) or rice.

The chicken has a very different flavor than an Indian Chicken Curry, as it’s more tangy because of the lemon juice & sumac, while brimming with additional flavors of the vegetables in the broth. Many people also use Chicken Stock in water, but I refrain from it. Why use anything artificial when everything is being prepared at home fresh and healthy.