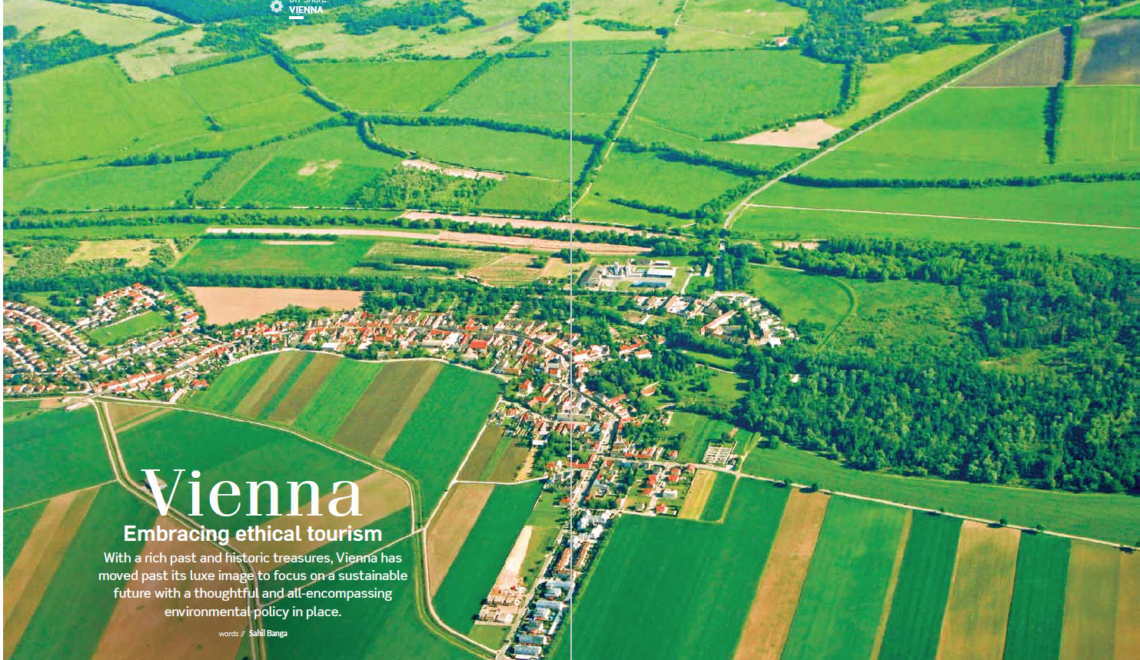 It was my good fortune that I had my article ‘Vienna’ get published on Air Vistara’s in-flight magazine – Vistara in their June ’19 issue. Special thanks to Maxposure Media for accepted my article for the publication. Below is the article and the screenshots.

Vienna : The capital of sustainability

With a rich past and historic treasures, Vienna has moved past its luxe image to focus on a sustainable future with a thoughtful and all-encompassing environmental policy in place.

Reaching Vienna (called Wien), it is advisable to peek out of the aircraft window, in fact there should be an announcement “Please look out, heaven below”. Simply because the sight is surreal. Swathes of green fields dotted with solar windmills look like an idyll world. The slow whirring of the windmills is symbolic of Viennese life, which you would realise later as you absorb the city.

What is remarkable about Vienna is that while it looks surreal and idyll, scratch the surface and you would know all that beauty is skin-deep. Unlike other ‘glamorous’ cities that look the part yet one knows that there was a surgeon behind the enhancements of their cosmetic beauty and there are many stitches & glitches.

Vienna is in many ways also a pioneer amongst its European counterparts to be able to provide its citizen not just ‘one of the best’ but the ‘very best’ living standards. It doesn’t come as a wonder that Vienna had been winning the tag of ‘Most Liveable City In The World’ consecutively for a decade now. Add to it the fact that one fourth of the country’s population lives in Vienna, yet the over-populated city has managed to strike a balance and worked towards enhancing the living standards. Their integrated smart city strategy is bearing fruits for today and the future, also helping them win the World’s Smartest City honour in the 2019 Smart City Strategy Index.

This could be accredited to the fact that Austria is one of the leading countries in Europe to have its environmental policy in place. And it’s not just the government of the country but also its people who could be given equal credit. The story goes back to 1978 when the Austrian government asked it citizen to vote for choosing or rejecting the usage of nuclear power. And the majority voted against it as the 1978 referendum materialized.

The decision to go against nuclear power benefited the country as today, two-third of Austria’s energy comes from renewable sources and the rest from fossil fuels (gas and oil power plants). Austria currently produces more than half of its electricity by hydropower and harnesses other renewable energy sources such as wind, solar and biomass power-plants to reach the feat.

Whether it is the waste management, limits on airborne pollution, regulations on the use of pesticides & fertilisers, raising the water quality of lakes to excellent levels, rehabilitation of protective forests, management of natural resources, sustainable agricultural policies, climate protection acts, sustainable urban development, innovative solutions on mobility or green space planning, Austrian legislation takes its citizens’ health and environmental concerns rather seriously.

This is a case study in itself and the world should take notice as it grapples with global warming and other perils of 21st century.

As a tourist, first few things you would notice as the outcome of their environmental policies is the clean air and sweet water. With negligible pollution, the air you breathe would feel like pure oxygen and water you drink would feel like elixir. What is interesting to find in most of the Viennese Cafés is that they serve cold tap water along with coffee on the same cutlery, which has a recess for both coffee cup and water glass. The water is no ordinary water, it is amongst the sweetest water in the world. Something that needs to be slurped, not gulped. Just how one drinks coffee, at an unhurried pace, same goes for water. It’s not for the thirsty. If you are thirsty, go have beer, spare the water. Though one may not book tickets to Vienna just for their ‘gourmet’ water, but if you do, you would have a fluid story to write home about.

Taking a tour of Vienna is like going through a fairy-tale setting. The green spaces in the city are endless with 2000 parks as they envelop more than half of its urban areas. Take a stroll through the large parks that boast of infinite varieties of flora. Whether it is Prater, Augarten, Stadtpark, Volksgarten, Burggarten or Botanical Garden, one is sure to get delightfully surprised with so much nature around. There are many hiking trails in and around the city, while nature enthusiasts can also enjoy vineyard tours that are accessible through bus or tram. The green spaces are further punctuated by many water-bodies like rivers, ponds, lakes, streams, wetlands and fountains.

For those looking for organic, ecological or sustainable products, Vienna is a heaven for them. While countless organic bakeries and restaurants are a given, one can expect the highest quality ingredients and traditional methods of cooking within sustainable ways of agriculture. Vegetarians rejoice as most of these restaurants don’t serve meats. Vienna also accounts for a lot of organic farms so the produce is fresh at the restaurants, and there are many farmer’s market in the city to be experienced on weekends. Upping the game on the organic turf, Vienna also offers natural or sustainably produced cosmetics and clothes. The trendy clothes at hip designer boutiques are made using organic materials, while recycled materials are also used in ecological products like bags under fair conditions. One can even have a high quality organic wine, processed with biodynamic guidelines.

A walk through history

Discover the city on foot and you would feel the European charm bewitching you. Exploring the city is a delight as every sight is beautiful, every building is artistic and every turn beholds a new vista. Even an old decaying house looks as intricate as it would have been in its heydays. Every building screams grandeur, with beautiful art application. There would be heavy stucco work, a sculpture or just an art piece hung around, making the city brim with stories of opulence and preservation in every possible facade.

Schönbrunn Palace, boasting 1,441 rooms, is more than 300 year old. It gives a royal glimpse into the imperial lifestyle of the Habsburg monarchs who ruled the land and had a fine taste in art & architecture. Since 40 of its rooms are open to the public, this is the closest one could get to the royal archives, peeking into residential suites, imperial apartments & state rooms that include several bedrooms of different rulers, salons, studies, dressing rooms, mirrors rooms, carousel room, breakfast cabinet, billiard room, and much more. Carrying the English audio guide is highly recommended as it gives vital information as you visit each room – about the inhabitants, the artworks, furnishing, décor, functionality and highlights.

MuseumsQuartier Wien is not just the largest museum complex of Austria but a thriving centre of modern art & cultural activities, the coolest courtyard to hangout at and a ready reckoner into the world of art. Several bars, cafes, restaurants, retail stores, events and make-shift arrangements make this place a must-visit for culture-vultures, art snobs and anybody looking for a chilled-out time.

When on a shopping spree

Naschmarkt, the historic 16th century market, is undoubtedly Austria’s most popular outdoor market, stretching to 1.5kms. The lively market is a melting pot of exotic goods from around the world. It also gives a glimpse into the multicultural Austrian life, where locals and tourists visit to buy their organic produce, drinking at the several diners, sampling different cuisines at stalls, or just enjoying the vibe. Throw in occasional accordion players or guitarists crooning alongside the merchants selling their wares, and you have a symphonic cacophony at this daytime market. Don’t forget to visit the market on a Saturday when it extends little further to accommodate a flea market as well.

Located in Vienna’s first district, the city center, the high-end markets of Graben & Kohlmarkt are dripping in bejeweled glamour, quite literally. The Romanesque & Baroque buildings came into being housing jewelry stores appointed by the Royal Court, and it is evident by the umpteen local & international jewelry stores exhibiting glittering displays. There are plenty of retail stores, restaurants and cafes while a Plague Column and two 15th century fountains punctuate the beauty of the historical district. A 10 minute walk to Philharmonikerstrasse will reward you with one of the finest coffee houses in the country, Café Sacher Wein, most popular for the original Sacher-Torte, a chocolate cake invented in 1832 and said to be one of the world’s best chocolate cakes. Did you know, there is a day dedicated to this heavenly dessert in the United States, called National Sachertorte Day on December 5.

Vienna is supremely beautiful and full of historical treasures, all you have to do is spend quality time with her and breathe in the purest air! For those thoughtful of their carbon footprint can stay at eco-friendly green hotels, ride electronic scooters or travel in hybrid cars, eat organic food, buy ecological & natural products, indulge in sustainable fashion and enjoy the vegan life. You could have never felt so responsible!

A big bus tour with a recorded guide gives out as much information as one could gather about the city. But the experience of being driven around in a horse-drawn carriage is most memorable, something every tourist should indulge in. The historic city comes alive in this magical ride, leaping from eras to eras.

The main Roman Catholic Church in Vienna was established in 1147 AD. For an aerial experience, climb the 343 steps to reach the apex of Steffl Tower and reward yourself with sweeping views of Vienna’s inner city. The Church is popular for many reasons apart from its decor – it houses Austria’s largest bell, while Mozart got married here in 1782.

Vienna is known for its wide range of honey, owing to over 5,000 bee colonies in the city managed by 600 beekeepers in the summer. The beehives are found not just at green spaces but at prominent landmarks like Vienna State Opera, Natural History Museum and City Hall. One could also spot beehives on roofs of popular hotels like Hotel Intercontinental, Hotel Daniel etc. who utilize it for sustainable, in-house honey production.