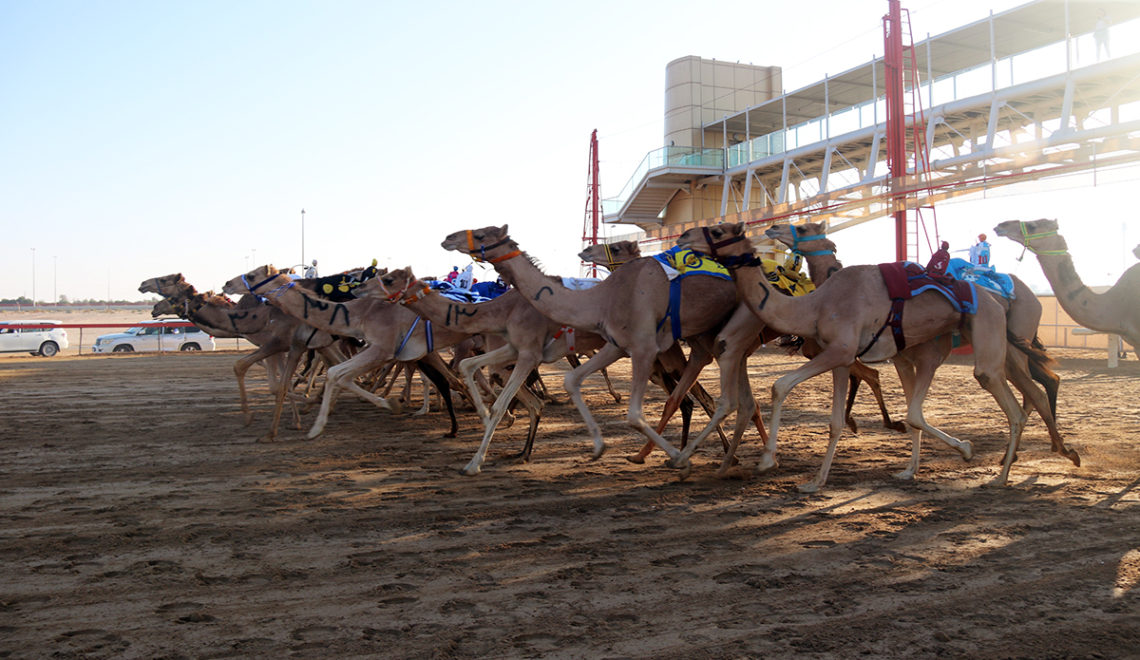 For a person who takes his weekend sleep very seriously, waking up before dawn was a task. The excitement of witnessing something new was encouraging enough to not snooze the alarm. With camera in tow, I sped through the empty roads, catching the early morning rays and enjoying the wintry chill of Dubai. The buildings of Dubai skyline looked ethereal with their glass façade reflecting the sky in its most serene avatar. 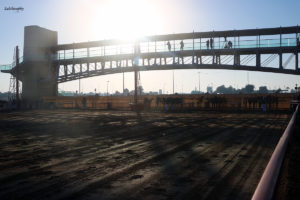 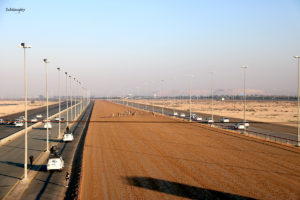 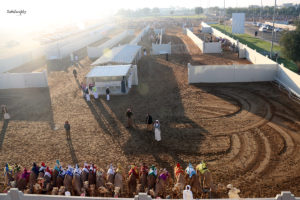 Once I connected to route 311, I could sense that the sun would be up anytime soon as I could see the sky change colors from purple, red to yellow. I was getting impatient as I wanted to catch the sunrise on my camera. “Never mind, next time” I tried to convince myself as I saw a big ball of fire gleaming up from the horizon. The distance to Al Marmoum Camel Racetrack was longer than I anticipated. But the drive through the desert was a perfect preface to camel racing, both of them a far cry from the glitz of the city. 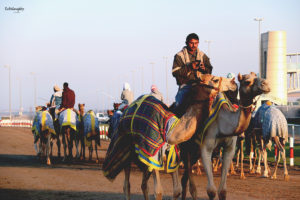 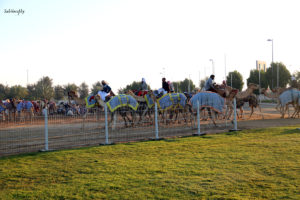 My heartbeats rose as I entered the area. The entrance features beautiful art installations of camels, and once inside, a large field with resting camels and jockeys welcome you. I didn’t know where to stop the car. Every frame here was snap-worthy. I vroomed to the closest parking, parked my car, ran back to the entrance and started taking pictures. The jockeys were whiling away time while camels looked beautiful draped in colourful clothes. This field was the way to get inside the tracks for them. I could sense that maybe the race has started. It was 8am already while the races start from 7am. In my mind, I had presumed that there would be only one race, which I have already missed. 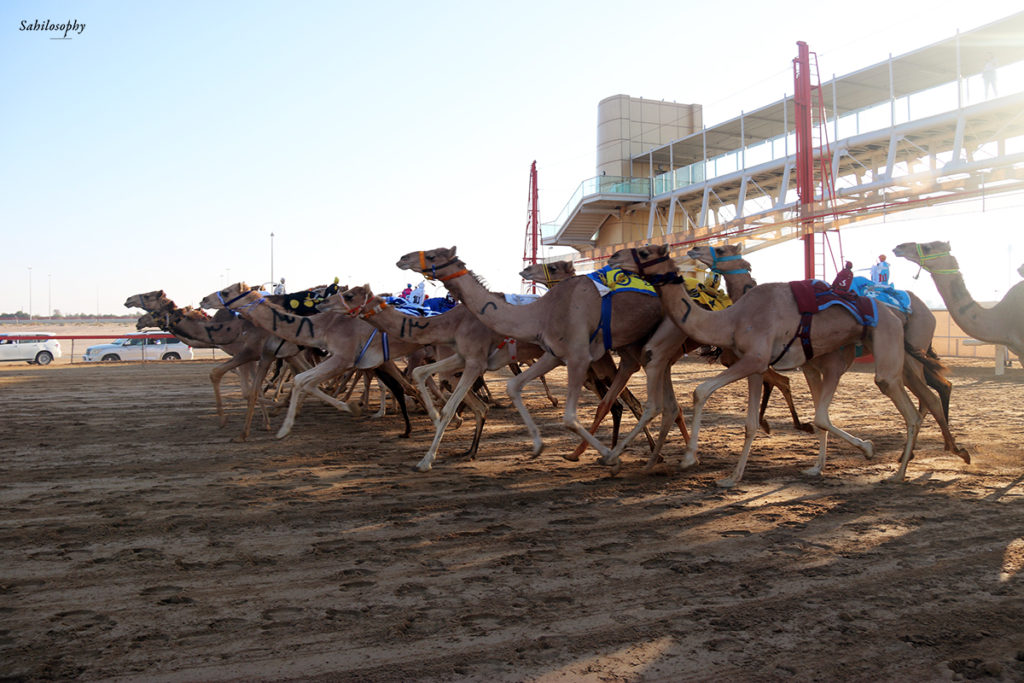 As soon as I reached the stands, I got to know that there are multiple races, each starting every 10 minutes. Camels would be gathered around at a place against a wall, after which they would be taken to the racing track. There they stood behind a mesh barrier. Behind the barrier, camels were compartmentalized into a group of five each, standing in close distance. I was told later that each of the groups belonged to one owner. There were about 20-25 camels in each race. The owners, apart from Emiratis, belong to different countries from GCC. 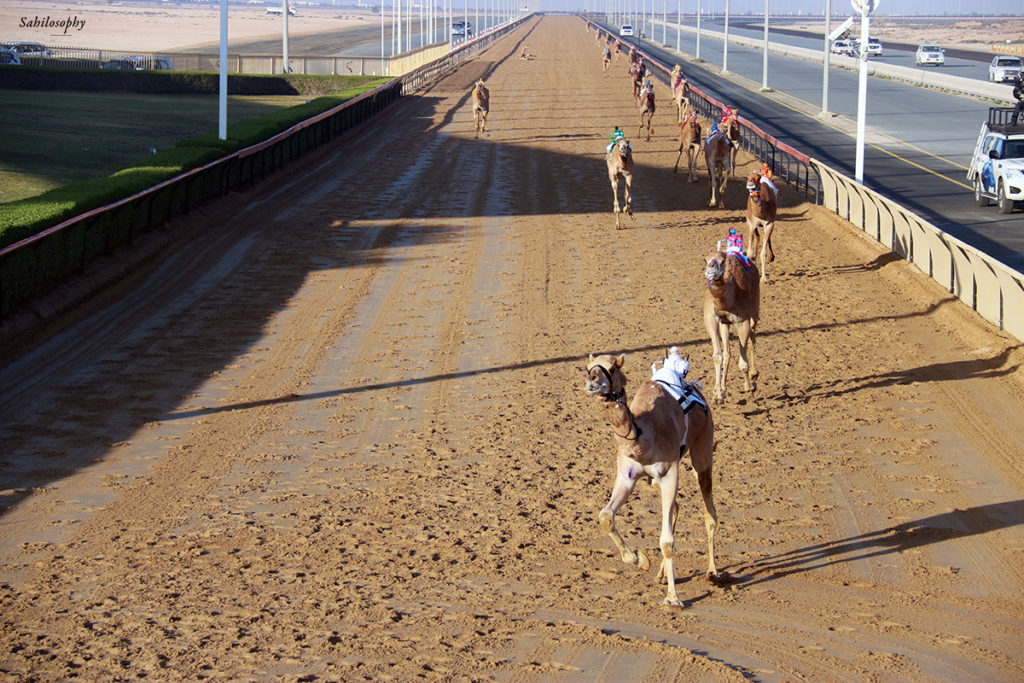 There is a walking bridge created to watch the race for an aerial view. My first race experience was amazing, as I could see how camels were brought from the resting field, to the gathering wall, then to the barrier. And then the race started off, without any loud horn or ultimatum. It just started. The rush of camels running haphazardly, leaving behind a trail of sand was spectacular. They were quick & ferocious. They had the same energy and emotions as humans do when they start a race. Beating each other in pace, side-lining and trying to outdo.

These camels though are not the kind you must have usually encountered or seen. They are small, slender and bony. As if they were not fed enough. But then these are bred for races, showing valour not typically seen in camels.

A fleet of SUVs also follow the camels on a lane designated for them to drive. These are the owners who follow the camels and cheer them up. The camels have an electronic jockey on them that resemble a child. Earlier kids were used to ride them, and it is said that when the kids wail, the camel runs faster. That tradition was banned and now the camels have this robot kind of jockey that has an electronic transmission, simply put a walkie-talkie. The owners keep cheering them up through that device from their SUVs. 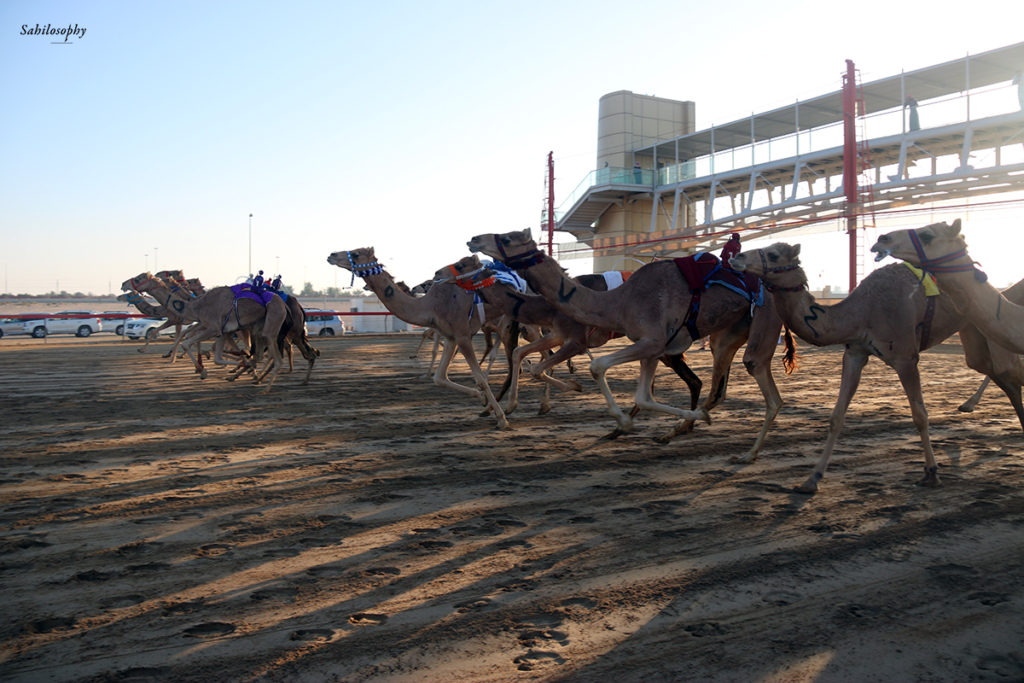 That moment doesn’t last long. Once I saw them on the fringes of the track, I came down to get closest to the track, for the next race. Each track is 4-11km long. The day I went there had a 5km track. One can see as far as maybe a kilometre or two from the bridge, after that wait for them to complete and come from other side towards finish line where the stands are. Bring a pair of binoculars if you want a closer view of the race. 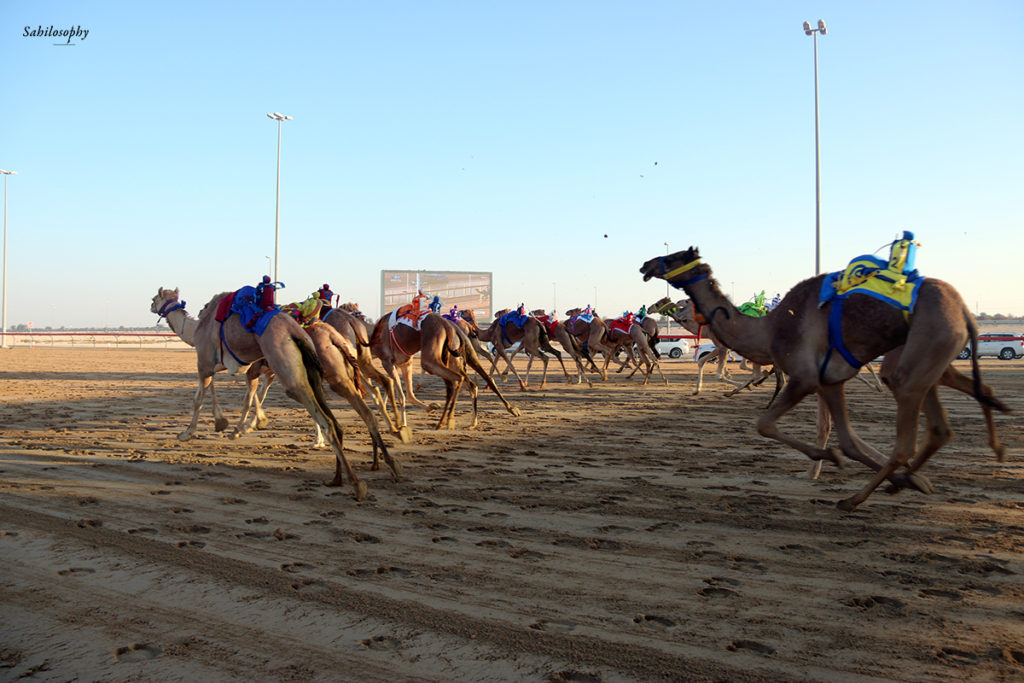 The camel race stands nowhere close to the kind of worldwide publicity Horse Race enjoys. While the Horse Race is about glamour, Camel Race is about heritage. Seeped deep in the sands of time, it represents the Arab culture at its raw purity. A centuries old tradition that is still intact.

The races happen every weekend from September to April, picking up pace during wintry months of January & February, when the frequency of races increases, and a finale also happens during this time. April features the Al Marmoum Heritage Festival when there are lot many activities and cultural shows happening. Yet, best bet is a Friday morning to catch the action. Reach there by 7am so that you enjoy the races for long (there is a new race starting every 5-10mins). I think the morning session ends at 10am. But there is another session that starts at 2pm concluding at 5pm. Yet cannot confirm this information. 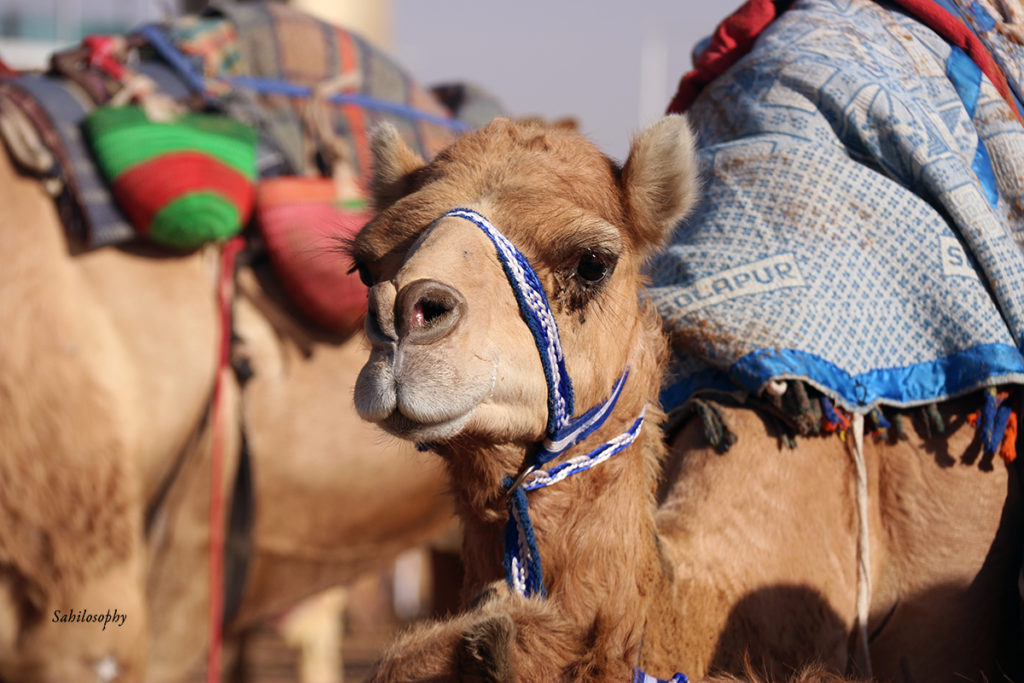 There are not many spectators or visitors to give you company, nor there are any information boards. That’s how isolated this race is from the city. I tried to dig deep on google yet couldn’t find much information, though there was a schedule of races in Arabic, which I don’t understand unfortunately. Even at the stands, there is no provision for food or beverages, there is a small kiosk outside the field that sells traditional Arabic breakfast. Once you come out to join the highway, there are a couple of Indian restaurants for a quick bite. While you’re there, you might also want to explore the nearby camel market at Al Lisaii where camels are bred, camel trading takes place, and you can buy camel milk, decorative items etc. 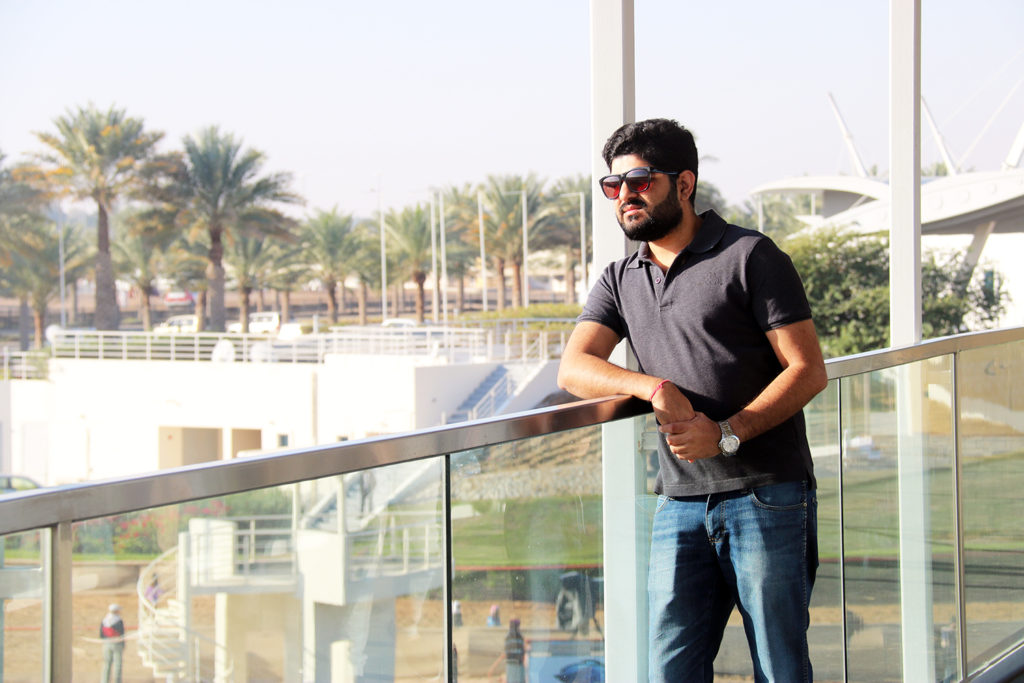